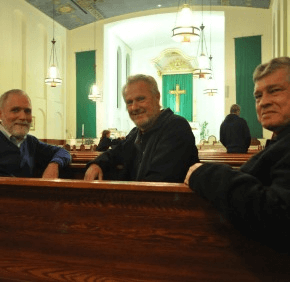 By Maria Wiering
mwiering@CatholicReview.org
Typically, 40 to 50 people dot the pews of St. Dominic in Hamilton at Saturday evening Mass. On Nov. 15, that attendance doubled, thanks to a former parishioner’s call for a “Mass mob.”
Richard Messick, a 1964 graduate of St. Dominic’s elementary school, was inspired by an Oct. 11 New York Times article describing the Mass mob phenomenon, which started in Buffalo, N.Y., and has since spread to Cleveland, Detroit and Philadelphia.
Riffing off the sudden and ephemeral nature of flash mobs, organizers choose an old church with dwindling attendance, and, for one Mass, fill its pews with people.
Messick, 64, posted the Times story to Facebook in October and wrote “Hey SDS (St. Dominic School) people, let’s do this.” His former classmates responded favorably, and agreed to meet at the northeast Baltimore church Nov. 15.
At the beginning of Mass, St. Dominic’s pastor, Father Ty S. Hullinger, said he was glad to see more people in the church, and that Mass mobs elsewhere had inspired Baltimore Catholics. He recognized that many people “were more than visitors,” since they were returning to their childhood parish.
St. Dominic is “a place of memory and a place of hope for all of us,” he said, where the church’s mission is “very much alive.”
About 25 members of St. Dominic’s “mob” were from the school’s Class of 1964. The group has held four reunions and keeps in touch with Facebook and email, which Messick said eased the event’s organization. Messick attends St. Ignatius in Baltimore, and said he hadn’t been to St. Dominic in 20 years.
Cindy Budrecki, who drove almost an hour from her home in New Freedom, Pa., said it was “just like coming home.”
Her former classmate, Paul Wimmer, a parishioner of St. John the Evangelist in Hydes, said the last time he was in the church was for his father’s funeral in 2002. He said the Mass mob might inspire former parishioners to return to St. Dominic for another liturgy, without the group.
Howard Bradley, who joined the church with his wife 64 years ago, was surprised to see more people at Mass, but quickly dismissed the crowd’s size.
“Even with all of them, it still wasn’t very big,” he said. “I was here when you had every pew filled.”
Several Catholics drawn by the Mass mob recalled childhood memories of ushers packing them into pews, or standing during Mass because no seats were available. In the 1950s, St. Dominic expanded its church to accommodate the baby boomers.
“The church and school were bursting at the seams,” Messick said.
In the decades since, Hamilton’s demographics changed as the city’s population declined. In 2005, St. Dominic School consolidated with other northeast Baltimore parish schools to form Mother Mary Lange Catholic School in Gardenville, which in 2010 was among 13 Baltimore-area Catholic schools to close.
St. Dominic draws about 250 families each weekend, said Father Hullinger, who is also pastor of St. Anthony of Padua-Most Precious Blood in northeast Baltimore. His parishes describe themselves as “one family at three locations.”
“It’s good for people who are the active part of these churches – that are much smaller now than they were – to know that we’re not forgotten,” Father Hullinger said. “Though we’re small in numbers and we have these big churches, we’re big in ideas and what we want to do as church.”
Also see:
Maryland Catholic doctor who treated patients in Sierra Leone dies from Ebola
Dad’s kidney keeps daughter going
PrevNext