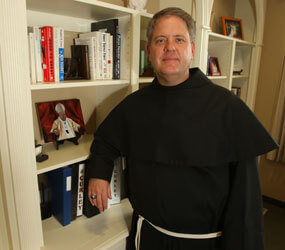 When an eighth-grader at Most Precious Blood named Michael Martin took his high school entrance examinations in the mid-1970s, his father made a simple command.

“You’re going to Curley,” he said.

“I said ‘OK,’ and that was it,” said now-Conventual Franciscan Father Michael T. Martin. “There wasn’t any big discernment process. It was great.”

He didn’t just go to Archbishop Curley High School, an all-boys institution, he began a journey there that will – at least for now – come to a conclusion in June. The 1979 graduate has worked at the school for 16 years, the last nine as president. He will be succeeded by Conventual Franciscan Father Joseph Benicewicz, a 1978 graduate of the school.

Stepping down came after much discernment, as Father Martin’s affection for Curley is evident.

“As a friar, staying in one place too long keeps us from having that experience of letting go,” Father Martin said. “I think that experience is a good one. St. Francis wanted to caution us against being too attached. The longer you stay in one place, the more attached you just naturally become.

“I was just a little too attached and it’s time to let it go.”

As a student, he was involved in student government, theater productions and dance committees.

“My mother used to say she was going to move my bed up here,” he quipped. “It was like I lived here. Eventually, I did move my bed here.”

Despite wanting to be a sportswriter, he heard the vocational call.

A meeting with the friars’ vocation director finally swayed him.

He entered the Franciscan novitiate in Ellicott City and attended seminary in Massachusetts. He received his bachelor’s degree in philosophy and taught for one year at St. Francis High School in Athol Springs, N.Y.

Ordained in 1989, he returned to St. Francis, serving as admissions director and religion teacher for five years, during which he received a master’s from Boston College in education administration.

He was transferred to Curley in 1994, serving as admissions director, religion teacher and basketball coach. Two years later, he became principal at age 32.

“I loved,” Father Martin said, “that on any given day there was some student who was experiencing some challenge, that if handled the right way, could be transformational in his life.”

He became president in 2001, and reconnected the school with alumni like Neil Cashen, ’72, now chairman of the school board.

“He is a very dynamic leader,” Cashen said. “He really can keep his eye on where wants everything to go and how to get there.”

The school recently completed a $7 million capital campaign that built an arts center. The friary was downsized and a new library created, along with offices, meeting areas and a modern fitness center. Science labs and the auditorium were updated.

Enrollment has grown, to near 600 students. No longer just a Northeast Baltimore school, Curley is a regional institution, thanks in no small part to touches such as Father Martin voicing advertisements for Curley on WBAL radio.

“People have to know that you’re growing,” Father Martin said, “because they wonder if you might be dying.”

He went on to define the standard of the Curley man.

“He’s someone who appreciates God’s presence in his life and is comfortable expressing that,” the president said. “He’s ultimately concerned about someone who is not as fortunate as he is.”

He is unsure of his next position, but should have a clearer picture soon.

Father Martin said that Curley is in good hands with Father Benicewicz, who grew up in Sacred Heart of Mary Parish in Graceland Park.

“Joe is going to give 150 percent,” Father Martin said. “I’m excited about our future. It’s just going to continue to grow.”

He acknowledges that life without Curley will be hard.

“The times when I’ve moved, it’s been difficult,” Father Martin said. “I missed the people. I’ve been here 16 years, so multiply that exponentially.”