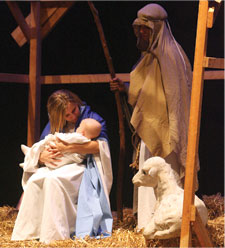 The two white sheep were well-behaved on the Blessed Virgin Mary’s left and right, keeping very still. That’s because they were the only lifeless characters in Archbishop Curley High School’s Dec. 9 prayer service celebrating the Nativity at Greccio, Italy.

On stage at the Baltimore school, the bald baby Jesus looked around the crèche as Mary rocked him. He seemed to listen to the choir bellowing “O Come, All Ye Faithful,” although oblivious to the fact that the words were meant for him, symbolically. At one point, he reached up to tenderly touch Mary’s peaceful young face encircled with a blue veil.

That song and other Christmas carols at the evening service were directed by the busy hands of choirmaster Michael Gaffney, a 10-year Curley veteran. His movements cast quick shadows onto the organ’s song sheet under the spotlight. The audience in the dim auditorium sang along with the school’s Schola and Luminare choirs, tiered three-deep to the left of the wooden manger where shepherds, kings and the Holy Family stood as still as the plastic sheep.

“There was a wonderful spirit here,” said Mr. Gaffney immediately after the performance, “and certainly a lot of wonderful participation with the actors and the choir – and the audience – a joint effort among all of those people. I’m very pleased.”

Curley’s white-gloved “ringers” added the finishing touch to the evening with the lovely notes that resonated from their handbells.

“It is fitting to gather around the manger,” said narrator Matthew Rosenthal. “Without him (Jesus), nothing came to be.”

St. Francis of Assisi believed the same 784 years ago when he arranged the first live Nativity in the winter of 1223 in the small town of Greccio, Italy, using townspeople, noblemen and friars. The friars were so moved they begged the townspeople to continue the tradition each year until it spread throughout Italy and eventually into the New World, becoming one of the most beloved practices of the Christmas season.

Curley freshmen have carried on the Greccio tradition each December since the Franciscan’s school 1961 inception.

The service marks the first major event of a freshman’s career at Curley, said Jamie Long, director of campus ministry and religion studies instructor. “The class of 2011 feels very honored and humbled to carry on this longstanding tradition.” He and Ed Lawrence, theater director, coordinate the service.

“Tonight’s celebration was truly in the spirit of St. Francis,” said Father Michael T. Martin, O.F.M. Conv., president of the school, before he blessed the pile of hay at the front of the stage and invited audience members to take some home.

Denise Lamond, parent of a Curley senior, stuffed hay into a few plastic bags to take home for her neighbor and her sister. She said she likes that the hay is blessed. “We use it in our crèches every year.”

Eight-month-old Elizabeth Pollard – who portrayed baby Jesus – protested a few times in the manger during the service, but otherwise “did very well” said Father Martin. In fact, the audience applauded a little louder for the infant actress, daughter of teacher Rebecca Pollard, during the standing ovation after the performance.

“Let tonight be a remembrance of the simplest things in life,” said Father Martin. “It is in those simplest of moments that our Lord comes.”