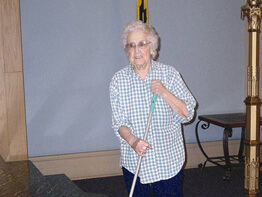 CUMBERLAND – As soon as the last words of the closing prayer were uttered at the end of a recent morning Mass at St. Mary in Cumberland, they descended like an earnest horde of bees.

Carrying buckets, feather dusters, cloths, vacuum cleaners and more, a team of seniors, ranging in age from 62-92, set to work attacking dust and dirt without wasting a minute.

Some polished brass handrails on their knees while others stretched on tiptoes to wave feathers at tall candlesticks. Still others pushed roaring vacuums, cleaned votive candles or tidied bathrooms.

Theasa Gray, the senior-most volunteer at 92, was busy dust-mopping the altar steps when she paused to explain why she does it.

“We just enjoy doing it and someone has to do it,” she said.

Ursula Mantheiy, who was busy replacing votive candles, said the volunteers save the church money. While they laugh and joke as they complete their assorted assignments, she said, everyone is focused on doing a good job.

“We’re workers and where there’s work to be done, we do it,” she explained.

Madeline Clark, who has volunteered since 1983, said the group meets every Wednesday after the 8 a.m. Mass. Once a year, the team scrubs all the pews.
“That’s hard work,” she said.

Many years ago the team scraped chewing gum from the bottom of the pews, collecting a pound of the annoying substance. There hasn’t been much of a chewing gum problem in recent years, although the seniors still occasionally have to deal with it.

Paul Eirich is a 77-year-old altar server who carries flowers, changes oil in the candles and does whatever else needs to be done.
“We’re all supposed to help the church,” he said.

Officially known as St. Mary’s sanctuary society, the organization was formed in 1976. The volunteers – all retirees – also launder altar cloths, decorate and prepare the altar for Mass. One woman even makes and embroiders bibs for infant baptisms.

“This place remains spotless,” said Father Milton Hipsley, pastor. “They are always in good form. They do a wonderful job and they have fun doing it.”