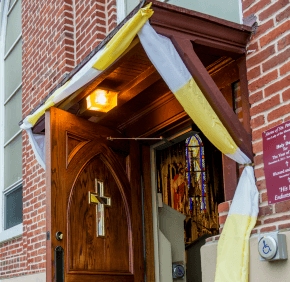 CUMBERLAND – On May 17, during noon Mass at the Shrine of Ss. Peter and Paul, Capuchin Franciscan Father Gregory Chervenak encouraged three dozen worshippers to, on occasion, give “anonymously.”

To mark Corpus Christi (formally the Solemnity of the Most Holy Body and Blood of Christ), he will ask his congregation to proclaim their faith publicly.

Father Chervenak is  pastor of Our Lady of the Mountains, which consists of five churches in and around Cumberland, including St. Patrick on North Centre Street, the starting point of a Corpus Christi procession after 11 a.m. Mass May 29 that will cross Wills Creek on Market Street and end with benediction at the Shrine of Ss. Peter and Paul.

“We’ll be processing through the community, with the Eucharist, to be enthroned here,” Father Chervenak said during an interview at the Shrine of Ss. Peter and Paul. “We’re going to make public our love of our Lord and the Eucharist. We’re not ashamed to be Catholics.”

Story continues beneath video below

The Shrine of Ss. Peter and Paul has been offering opportunities for that witness throughout the Holy Year of Mercy, which began last Dec. 8 and concludes Nov. 20.

The Cumberland shrine is one of eight holy door sites in the Archdiocese of Baltimore. Like the papal basilicas in Rome, visitors to those sites can receive an indulgence, one also obtained by performing spiritual and corporal works of mercy.

Why is the shrine, which was established in 2011 by Cardinal Edwin F. O’Brien, then-archbishop of Baltimore, the holy door site in Western Maryland?

“When Archbishop (Edwin F.) O’Brien made it a shrine of the archdiocese, it was dedicated specifically for this whole region,” Father Chervenak said. “The most obvious thing was for Archbishop (William E.) Lori to say that Ss. Peter and Paul is already a shrine, it should be worthy of a holy door.”

Yellow bunting signifying as much is draped around an entrance on its west side.

“People come here from other parts of the country on bus tours, it’s been well-used,” Father Chervenak said. “Some come in and say, ‘I want this confession, so I can go through the holy door.’”

They enter into a space rich in church history.

The church, on a site that has been known as Fort Hill and Academy Hill, according to a brochure available in its narthex, was founded in 1848 by St. John Neumann, the first U.S male citizen to be canonized. Blessed Francis Xavier Seelos was another early pastor. Both were Redemptorist priests.

“The Redemptorists had a great tradition here, followed by the Carmelites and now the Capuchins,” Father Chervenak said. “These have been holy grounds for years, not only for religious, but the laity. It’s a place where you can feel God’s presence.

“The beauty of our church makes people just drop their jaw when they come in, especially people who aren’t Catholic. When they come in for weddings, they’re just blown away.”

The holy year’s regular worship has included the addition of a holy hour for women, 6-7 p.m., on the first Sunday of the month.

Susan Trice, an art teacher at Bishop Walsh School, is among the regulars.

“I didn’t even know what holy hour is until I experienced it,” she said. “It is a special time to be close to God. We pray the rosary, go to confession. When we started, in the snow back in January, we would have been happy to get 10 women. We got 60.”