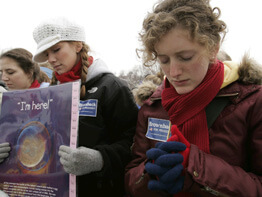 WASHINGTON – “A true culture of life cannot be built by changing laws alone. We’ve all got to work to change hearts,” President George W. Bush told tens of thousands of participants in the 34th annual March for Life Jan. 22.

President Bush spoke by phone at the beginning of a two-hour rally on the National Mall preceding the marchers’ slow, peaceful trek around the Capitol to the steps of the U.S. Supreme Court.

With temperatures hovering right around freezing, the marchers packing several square blocks of the Mall and overflowing onto side streets turned the previous day’s snowfall into acres of muddy slush.

Among featured speakers was U.S. Sen. Sam Brownback, a Kansas Republican whose appearance at the microphone sparked huge cheers from a large Kansas delegation just in front of the stage. Hundreds of people in all parts of the crowd waved blue “Brownback for president” signs, reflecting support for his decision to make a bid for the Republican presidential nomination next year.

“We need a culture of life that respects all life … from conception to natural death,” said Sen. Brownback, a Catholic.

“The unborn person is unique, is sacred, is beautiful” and he or she “deserves protection,” he added.

The archbishop told Catholic News Service that he “thanked him for making the sacrifice for running for national office.”

“We support the values he stands for,” Archbishop Naumann added. “We need people like him.”

Among the more than 20 Catholic bishops at the rally were Cardinals Justin Rigali of Philadelphia and Sean P. O’Malley of Boston.

Archbishop Raymond L. Burke of St. Louis, who led the rally’s final prayer before the start of the march, thanked the marchers for their “daily engagement in the fostering of human life … without exception, without compromise.”

The theme of this year’s march was “Thou shalt protect the equal right to life of each innocent human in existence at fertilization. No exception! No compromise!”

Nellie Gray, who has led the March for Life since its inception in 1974, said she warned abortion advocates back then that they were on a “slippery slope” that would also lead to euthanasia.

Among people she introduced on the stage were Bobby Schindler and Suzanne Schindler Vitadamo, the brother and sister of Terri Schindler Schiavo, the Florida woman who two years ago died after her life support was removed by court order at her husband’s request, despite efforts by her parents and siblings to keep her alive.

Carl A. Anderson, supreme knight of the Knights of Columbus – which in 1954 led a successful campaign to get “under God” inserted into the Pledge of Allegiance – led the rally in reciting the pledge. As the people recited “with liberty and justice for all,” he added a three-word phrase, “born and unborn.”

Ms. Gray summarized the purpose of the march: “We’re not here to reduce abortion, we’re here to stop it.”

“Feminist abortionists, listen up,” she said. “You may not kill innocent human beings in my name.”

Standing behind the speakers for most of the rally were more than 20 women with signs, “I regret my abortion.” The sign held by the one man in the group said, “I regret lost fatherhood.”

Georgette Forney, president of Anglicans for Life, said abortion not only kills the unborn child but harms the woman and man left behind. She urged women who have had an abortion and are hurting to seek out groups like hers. “There’s help and healing available,” she said.

Rep. Mike Pence, R-Ind., said the large numbers of young people at the rally signaled the growth of opposition to abortion among younger Americans. Despite the best efforts of abortion advocates, he said, “they’re hearing it’s not a choice, it’s a baby.”

Rep. Steve Chabot, R-Ohio, noted that the U.S. Supreme Court is currently considering the constitutionality of the federal Partial Birth Abortion Ban Act. Citing the changes in the makeup of the high court over the past two years, he said, “I’m cautiously optimistic that they will uphold that law.”

No estimates were immediately available for the number of marchers.

At a press conference two hours before the march, leaders of the National Right to Life Committee called the high court’s 1973 abortion decisions a contradiction of the Declaration of Independence’s pronouncement that life is among the unalienable, God-given rights which governments must protect.

Since 1973 “there is no ‘unalienable right to life’ nor is that right a ‘self-evident truth.’ Instead, we have the feelings of the mother,” said Wanda Franz, NRLC president.

She said the Democratic swing in the November elections has led many to think abortion opponents took a beating at the polls. But in the 18 competitive races where the National Right to Life Political Action Committee supported a candidate running against an opponent backed by Emily’s List – which supports only candidates who back abortion on demand – 14 of the NRLC-backed candidates won, she said.

Contributing to this story was Paul Haring.