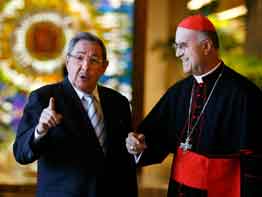 MIAMI – Pardon the yawn, but that is how Cubans in Florida reacted to the news of Fidel Castro’s resignation as president of Cuba.

Raul Castro had been running the country since his brother ceded power to him 19 months ago, after announcing he would be undergoing intestinal surgery.

“I would have been surprised if they had told me that Fidel Castro had gone on an Ignatian retreat, seven days without speaking,” added Monsignor Perez, who was among a group of priests – including Miami’s retired Auxiliary Bishop Agustin A. Roman – who were expelled from the island in 1961. “That would be surprising.”

The change at the top “doesn’t make any difference to me and even less to the people of Cuba,” agreed Rosario Bergouignan, a notary in the Miami Archdiocese’s metropolitan tribunal, who visited Cuba in January on a humanitarian mission.

Bergouignan left the island in 1961 at age 19 and did not return until 1998, when a group from Miami flew to Havana to attend the Mass celebrated by Pope John Paul II.

Moved by the suffering of the Cuban people, who she said lack access even to basic medicines such as aspirin, Bergouignan started a group called Hope on Eagle’s Wings, whose goal is to take medicines to Cuba and establish bonds with Catholics there.

She told the Florida Catholic, Miami’s archdiocesan newspaper, that some people in Cuba were hopeful that Raul Castro, who is considered more pragmatic than his brother, would bring needed change to the island, especially on the economic front, as he is reportedly more open to copying the Chinese model of limited free enterprise.

“They thought there has to be a change because they simply cannot continue to live like that,” said Bergouignan, noting that the home where she stayed had been without running water for 14 days.

Two Cubans in Tampa also said they were hopeful, but not optimistic, that Cuba would change.

Pedro Conde, a parishioner at St. Lawrence who left the island in December 1980 and came to the United States in 1985, said any change for the better in Cuba needs to start with establishment of a real democracy.

“Raul, his brother, keeps the same political (machine), the same type of government; there is no change there,” Conde told the Florida Catholic, which is also St. Petersburg’s diocesan newspaper. “What we need in Cuba is to have the political prisoners be free. We need to have a democracy, a government that is elected by the people, not the system. … We need the freedom of speech.”

Jose Luis, a member of St. Joseph Parish in Tampa who has been in the United States 41 years, said that as a young Catholic he was sent to a concentration camp after Castro took over.

He loves Cuba, he said, and hopes Castro’s resignation will lead to restoration of a strong relationship with the United States. But Luis doesn’t believe much of the information coming from the government of Cuba. He said Castro lied to the people when he came into power and his government continues the practice to this day.

Luis said things have improved for Catholics since Pope John Paul II visited the country, but he still would like to see more freedom for the church.

Father Fernando Heria, pastor of St. Brendan Parish in Miami’s Westchester neighborhood, said, “Cuba’s political climate will always affect the church,” and the recent transfer of power is bound to have a “ripple effect on the working relations” between the government and the church.

But Father Heria, who left Cuba as a teenager but returned for the papal visit and other religious events since 1998, said he believes that a “transition” in the Cuban government began many years ago.

“It has been a slow ‘brewing’ process, but it is there nonetheless,” Father Heria said. “I feel that Pope John Paul II’s visit to Cuba in 1998, in addition to being a historic faith-filled visit, has also had very positive effects in the understanding of the state and church working relationship. We do not always agree, but we have now more freedom to express our dissent as a church … and that is always healthy.”

Father Heria added, however, that “it is highly premature” to speculate on what will happen in Cuba in the coming months or years.

“I strongly believe that for now, we should all do what Catholics do best: We should pray,” he said. “We should be on our knees praying for a peaceful transition in the governmental affairs of the Cuban government and especially in its relationship with the church hierarchy and God’s people.”

Contributing to this story was Janet Shelton in Tampa.