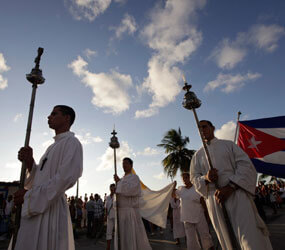 HAVANA – Economic woes and accusations of human rights abuses have thrust Cuba into “a difficult situation, the most difficult we have experienced in the 21st century,” said Havana Cardinal Jaime Ortega Alamino.

While many people have proposed solutions for the island nation’s social and economic problems, “a key common denominator is that Cuba must quickly make the changes needed to improve the situation,” Cardinal Ortega said. “I think there is national consensus on that, and delaying it creates impatience and ill will among people.”

The cardinal said the international economic crisis, U.S. trade embargo and effects of three hurricanes “come on top of Cuba’s perennial economic difficulties, which stem from the constraints of the type of socialism practiced here and result in an often gloomy outlook.”

He had sharp words for the Obama administration’s relations with the government of Cuban President Raul Castro, who took over as president in 2006, when his brother, Fidel Castro, stepped aside because of illness. Raul Castro was officially elected president in 2008.

“A Cuba-U.S. dialogue would be a necessary first step toward breaking the vicious circle in which we find ourselves,” Cardinal Ortega said.

When Raul Castro took office, he proposed unconditional dialogue with the United States with no topics off limits, the cardinal said. During his presidential campaign, Obama also “indicated he would change the style (of relations with Cuba) and would seek to talk directly with Cuba,” he said.

“After taking office, however, the new U.S. president has repeated the old model of previous governments: If Cuba makes changes with regard to human rights, the United States could lift the blockade and open up possibilities for subsequent dialogue.”

In Washington, a spokesman for the U.S. bishops said the cardinal’s remarks reflect the church’s longstanding position that the U.S. embargo of Cuba is morally unjustifiable. He said the Obama administration’s pace toward changing the situation looks like “business as usual.”

Human rights in Cuba made headlines around the world with the death of dissident prisoner Orlando Zapata Tamayo in February, after a nearly three-month hunger strike. Another dissident hunger striker, Guillermo Farinas Hernandez, was hospitalized in March.

The cardinal called for dialogue and urged the government to “take appropriate measures” to avoid more deaths like Zapata’s, but also said Farinas should give up his hunger strike. In an interview with the French news agency Agence France-Presse, Farinas said he would continue his protest, which was in its 56th day April 21.

“We accept the words of Cardinal Jaime Ortega and his bishops with respect … but I am strong and am continuing my hunger strike,” he was quoted as saying.

Farinas, an opposition journalist, is demanding the release of 26 political prisoners who suffer from health problems. Although the Cuban government does not recognize the existence of political prisoners, Cuban dissidents say there are about 200 jailed opponents of the regime.

“The tragic death of a prisoner because of a hunger strike has led to a verbal war in the media in the United States, Spain and other countries,” Cardinal Ortega said, referring to Zapata. “This media campaign further exacerbates the crisis. It is a form of media violence to which the Cuban government responds in its own way.”

The “Ladies in White,” mothers and wives of some of the dissident prisoners, have been harassed by government supporters during recent demonstrations calling for the prisoners’ release. Cardinal Ortega spoke out against the harassment, saying that after the 1980 Mariel boat lift, the government pledged to stop verbal and physical attacks on opponents.

“We have seen with surprise that these actions have resumed here and also among Cubans in southern Florida, against other Cubans who think differently or artists from Cuba,” he said. “This type of verbal and physical intolerance must not go down in our history as a characteristic trait of Cubans.”

Although “historically, a call for peace is useless in the heat of war, this is the call the church has always repeated in times of conflict,” he said. “Amid this crossfire of words and arguments, the (Cuban) people are hurt, tired and longing for a more peaceful and prosperous present and future.”

Cardinal Ortega noted that the U.S. bishops helped broker the release of dissident prisoners in the 1980s and others were freed at Pope John Paul II’s request after the former pontiff visited the country in 1998.

“The church’s mission is always one of understanding and mercy, acting discreetly but effectively to resolve the situation of these people for their good and that of their loved ones, although the results are not always what we hope,” the cardinal said.