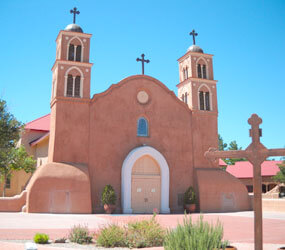 SOCORRO, N.M. – The adobe churches that are a scenic fixture of New Mexico’s landscape are crumbling from the inside out.

Father Andrew Pavlak knows this all too well. As the only priest assigned to a parish that encompasses most of Socorro County, his responsibilities include not only his main church, the 400-year-old San Miguel, but another nine churches, including seven made of adobe.

One of them, Sagrada Familia, (Holy Family) in the community of Lemitar, had a major wall collapse in June, after a well-intended restoration project ended up doing more harm than good.

A previous estimate of $38,000 to get Sagrada Familia back into shape fell apart when the church’s northwest corner tumbled down. Father Pavlak said it’s up to architects, engineers and insurance agents to work out the next moves. When Sagrada Familia is rebuilt, he said, the project “will most likely be reducing the size of the church to a much smaller reality of its former self.”

Keeping the state’s hundreds of historic adobe churches in useable condition is a daunting, expensive task. Engineering and financial logistics are complicated by the emotional connections people feel to the churches where their families’ history is rooted, whether or not the current generations even live nearby.

It recently cost $20,000 just to have studies done to evaluate the restoration needs of Sagrada Familia and another Socorro County mission church, San Antonio, in the community of Alamillo, Father Pavlak said. That covered architectural and engineering studies, including testing of the soil and water table, he told Catholic News Service during a September interview at San Miguel.

Like many of New Mexico’s adobe structures, the mud bricks of Sagrada Familia were encased in an outer shell of concrete-based plaster, intended to avoid the labor-intensive, annual maintenance ritual of recoating the walls with a thin layer of mud. As families have moved away from the small rural communities, fewer people are available to do the upkeep. And the skills needed were being lost with succeeding generations. For many communities, concrete-based plaster, which lasts for decades, seemed like the ideal solution.

But that system, which came into vogue throughout the Southwest in the middle of the last century, traps moisture inside walls and they deteriorate from within.

Even in New Mexico’s desert climate, moisture from the rare rain and snowfalls can seep in from small holes in a roof, or from puddles close to the building. Groundwater is soaked up from below.

The first outward sign of damage may be cracks in the plaster, explained John Huchmala, properties manager for the Archdiocese of Santa Fe. At Sagrada Familia, the telltale sign was buckling floorboards discovered last April.

“That was an indication that water was inside the wall, turning the adobe to mud,” which pressed down into the flooring, he said.

By that point, “the only thing holding up some walls is the plaster,” said Father Pavlak.

At Sagrada Familia last June, contractors who were working on repairs left for lunch and returned to watch two of the 179-year-old walls collapse. Weeks later, the church sat unuseable behind orange hazard-zone fencing, its interior exposed to the weather. A single, contemporary light fixture incongruously dangled just inside the main sanctuary.

If problems are discovered early enough, the inside of the adobes can be dried and stabilized, explained Huchmala.

That was case this summer at the nearly 400-year-old walls of San Miguel, when workers cut into the plaster and found the adobe bricks relatively intact, though damp, Father Pavlak said. The inner and outer walls are temporarily scarred with a series of carefully spaced sections, each about 4 or 5 square feet, where the half-inch-thick concrete plaster was cut out to allow air to circulate to the adobe bricks.

Drying takes time. In some places, the walls of San Miguel are 9 feet thick, and windows have 2-foot-wide sills. The cutout sections will remain open until at least May to give the adobes a chance to dry, he said. Meanwhile, architects and engineers will evaluate the walls’ condition and guide Father Pavlak about what to do next.

“We will eventually have to remove all the plaster from about the 5-foot mark above grade, expose all the adobes, let them all dry and then replace the plaster with the appropriate materials,” he said in a follow-up e-mail. “We hope to be able to replace some of the plaster before we have to take out the next sections, but that will be up to the professionals guiding us.”

Huchmala has become one of those professionals. Though he is neither architect nor engineer, his real estate background led him to the job managing the archdiocese’s properties. As such, he is part of the Commission for the Preservation of Historic Churches in New Mexico, an arm of the archdiocese that advises and supports community efforts to preserve churches.

Huchmala said a 1997 inventory counted more than 300 adobe churches in the archdiocese, some of them little more than crumbling outlines of a building. Many others are rarely used, only opened a few times a year for a feast day or maybe a wedding.

“You can tell by looking at a church how much the community is involved,” Huchmala said. And that’s the key to preserving or restoring them, he added.

But as both Father Pavlak and Huchmala said, the emotional ties people have to the churches of their ancestors is strong, even when they now live far away themselves.

“There’s a lot of emotion because of the history,” Huchmala said.

Under church law, it’s actually up to a parish to come forward and request help, Huchmala explained. That helps create a baseline requirement of local involvement when it comes to tackling church restoration.

But more practically, unless the local community is willing to either do the hands-on work of preservation, or raise the money to pay someone else to do it, they won’t get help from the commission or organizations that help with preservation, such as the Santa Fe-based Cornerstones Community Partnerships.

“Without a community behind it, a big project is a nonstarter,” said Robin Jones, executive director of Cornerstones, which provides technical and fund-raising assistance for adobe preservation and repair. “Otherwise, the yearly maintenance won’t be kept up.”

Cornerstones first assesses the state of a property, then will help with fundraising locally and by tapping state, federal and private grant organizations. It also helps pave the way to get approval from historic preservation organizations when applicable, Jones said.

As Father Pavlak has discovered, however, such support may not always be available or sufficient, making finances the significant issue in whether or not a crumbling adobe church is restored.

“At San Antonio it cost $7,000 just to get rid of the bats and guano,” Father Pavlak said. “The roof is shot, the heating and cooling need work.”

But even though that current church is only 75 years old, if San Antonio were to fall like Sagrada Familia, “it will attract a lot of attention,” he said.