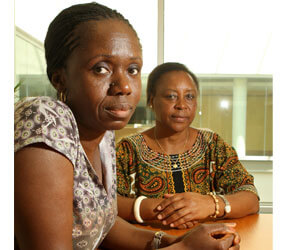 More than two years ago, a Congolese woman in her 40s was attacked and raped on her way home from selling produce at an Idjwi market. When she told her husband, they went to the village chief, who scolded the woman for resisting her two attackers.

“The chief told her she would have suffered less if she hadn’t wrestled them,” said Mathild Muhindo Mwamini, director of Centre Olame, a Catholic social assistance agency of the Archdiocese of Bukavu, South Kivu.

The woman’s ordeal is typical of many who are raped and sexually abused in the Democratic Republic of Congo, said Muhindo, who visited Baltimore-based Catholic Relief Services (CRS) July 26 after speaking to U.S. senators and representatives about sexual violence in her homeland.

In the last 15 years, rape has become a common weapon of war in Congo – transforming the African nation into what one United Nations official called the “rape capital of the world.”

According to UNICEF, hundreds of thousands of Congolese women and children, aged 6 months to 80, have been raped in the last decade. The crime is perpetrated by members of the army, militiamen and warring parties fighting over lucrative minerals like coltan.

“We have had conflicts in the past, but we never had rape used in such a systematic way against civilians,” said Muhindo, speaking in French through a translator. “It’s not about men and women. It’s about humiliation and dehumanizing society.”

Permissive attitudes about the crime have become ingrained in the culture and have been difficult to change. In the case of the woman raped in Idjwi, a higher chief ordered her attackers arrested, but they were released after prison officials were bribed. The criminals then accused the woman of lying and she was arrested.

A court eventually found the men guilty of the crime, and sentenced them to 20 years in prison – but because the woman couldn’t come up with bribery money to make sure the sentence was carried out, the men remain free.

“There are many, many stories like that,” said Muhindo, a former member of her country’s national parliament.

CRS partners with Centre Olame to provide psycho-social assistance to survivors of sexual violence. It also promotes justice and reconciliation, as well as the enforcement of laws.

“When you look at traditional values, women are considered important in society and they are protected,” said Olun Kamitatu, regional technical advisor on extractive industries and governance for CRS in the Central Africa Regional Office.

“We try to lead people to a reflection on how rape and sexual violence contradict their own belief systems,” she said.

Congo needs the support of the international community in protecting women and educating military leaders on women’s rights, Kamitatu said.