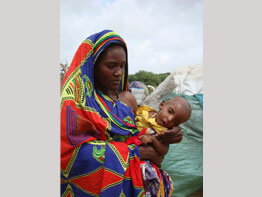 “I visited a feeding site run by the Ethiopian Catholic Church and the Missionaries of Charity in a largely Muslim area where, over the previous five weeks, 28 children had died of malnutrition,” he told members of the subcommittee. “The conditions there are already dire.”

The United States contributes more total food aid than any other country, providing more than $1.78 billion in fiscal year 2007, which is about 58 percent of the total spent globally for food assistance, said April Demert Slayton, a spokeswoman for the Subcommittee on Specialty Crops, Rural Development and Foreign Agriculture.

For fiscal 2008, $1.53 billion was provided for food aid through regular appropriations, which was increased by an additional $1.2 billion for global food assistance in the supplemental appropriations bill recently passed by Congress, Slayton said.

That supplement will not fully address the calamitous situation in Africa, Mr. Callahan said, and urged the committee to seek more funding from Congress.

Baltimore-based CRS is the overseas relief and development agency of U.S. Catholics.

Mr. Callahan described CRS’ emergency response to the food crisis, which involves getting food and cash into the hands of the urban and rural poor. These efforts include providing cash vouchers so families can purchase food, and projects that provide cash for work on disaster preparedness measures, like clearing out drainage canals to prevent flooding when a storm hits.

Though CRS will fund many of these projects with private donations, Mr. Callahan said there are not enough cash resources available from the U.S. government.

“I saw one Ethiopian parent bring a very sickly, lethargic child to the center for emergency treatment,” he told the subcommittee. “The parent told the sisters, ‘I brought this child because I thought he could make it. My weakest child is at home.’

“My first reaction on seeing all this was simply to bite my lip, to contain my emotion,” Mr. Callahan said. “My second reaction was anger. How could we let this happen? But the more I observed, I realized that this was a place of hope. I saw kids being fed and stabilized, getting better. Parents were thanking the workers for saving the lives of their children.”

Though subcommittee member Rep. Marilyn Musgrave, R-Colo., said she sympathized with the situation in Africa, she emphasized that the U.S. must do more than just provide emergency aid to these countries.

“Though emergency assistance is an important component of U.S. aid around the world, agriculture development is believed by many to be the foundation of sound economic progress,” Musgrave said.

“While we are willing and able to provide resources to help feed the world, I am confident that all Americans would applaud the moment these developing countries are able to build a sustainable economy,” she said.