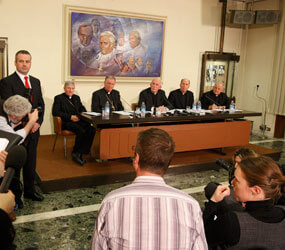 VATICAN CITY – For Vatican and Irish participants, the two-day meeting on the handling of priestly sex abuse cases was a major accomplishment, combining a frank admission of mismanagement with truly collaborative discussions on how to avoid such mistakes in the future.

But for much of the wider public, especially in Ireland, the meeting Feb. 15-16 fell short of expectations and was remarkable for what it didn’t do: no bishops were fired, no abuse victims were heard and Pope Benedict XVI made no plans to visit Ireland and build bridges to alienated Catholics.

“Papal whitewash” and “The pope has ‘washed hands’ of our abuse” were two not untypical headlines in Irish newspapers the next day.

The encounter highlighted the dilemma facing the pope and other Vatican officials as they try to defuse the pastoral crisis in Ireland. By convening the bishops, the pope clearly signaled his deep interest and concern over the scandal. But because the meeting was not designed to produce “marching orders” or even policy decisions, it was bound to leave some disappointed.

Managing expectations on a topic this explosive is never easy. In this case, the anticipated agenda of the meeting was inflated by media reports that spoke of a shake-up of the church hierarchy in Ireland or a grand papal gesture. Even the word “summit,” used by the press but not by the Vatican, suggested there would be high-level conclusions.

Instead, the results were much more about information-sharing than decision-making. There were several reasons for that:

– Irish bishops have already implemented much-lauded guidelines and policies to protect children from abuse, including full cooperation with civil authorities. As one Vatican official put it: “They already have a very good system in place. Now they have to follow it.”

In that sense, the issues on the table were different from those discussed in the 2002 meeting between U.S. bishops and Vatican officials, when the debate was over specific points of proposed sex abuse norms.

– Some of the big questions hovering over the Irish-Vatican meeting dealt with personnel. Archbishop Diarmuid Martin of Dublin, who has pushed for more transparency and accountability among the Irish bishops, has predicted “a very significant reorganization of the church in Ireland.” But the resignation of bishops has always been considered a personal decision involving the individual bishop and the pope, and would never be done by committee – or even by “summit.”

– Likewise, the suggestion by some Irish media that abuse victims should have been brought down to Rome for the encounter was never seriously considered at the Vatican. Church leaders said it would have seemed like a publicity stunt. They pointed out that when Pope Benedict met with abuse victims in the United States and Australia, it was arranged quietly and without fanfare. If something similar happens in Ireland some day, they said, it will also happen away from the media glare.

One outcome of the Vatican-Irish meeting was perhaps too subtle to measure on the media applause meter, but significant nonetheless. By all accounts, there’s been a shift in attitude inside the Roman Curia since 2002. At that time, the sex abuse crisis in the United States still found many Vatican officials in denial or very defensive; today, according to the Irish bishops, virtually all of the 10 Vatican department heads in attendance offered genuine support and help.

The Vatican now knows that priestly sex abuse is not a passing episode limited to one or two countries. As if that needed demonstrating, a new clerical sex abuse scandal was emerging in Germany even as the Vatican meeting took place – and the Vatican newspaper wrote about it. Cardinal Sean Brady of Armagh, Northern Ireland, said the Vatican seemed to understand that this is “not an Anglophone problem.”

Compare that to the famous remark made by Cardinal Dario Castrillon Hoyos at a Vatican press conference in 2002. After noting that many of the journalists’ questions were posed in English, he said that fact alone “already says something about the problem and gives it an outline.”

Cardinal Castrillon, a Colombian who was head of the Congregation for Clergy at the time, worried that accused priests weren’t getting a fair hearing, suggested that priests were being unfairly singled out as a category of professionals when it comes to sex abuse and implied that money was a factor in the cases coming to light.

His replacement at the clergy congregation, Brazilian Cardinal Claudio Hummes, has taken a much different approach. While defending the majority of priests as honest and admirable pastors, Cardinal Hummes recently said instances of priestly sexual abuse were “extremely serious and … criminal facts” that need to be brought to the attention of the civil justice system and not just to church authorities.

Echoing that, the Vatican communique at the end of the February meeting underlined the Irish bishops’ “commitment to cooperation with the statutory authorities” when they deal with abusive priests.

One line in the communique provoked some questioning, even inside the Vatican: the statement, attributed to the pope, that a “more general crisis of faith” affecting the church was a “contributing factor” in the sexual abuse of minors. To some, it sounded like an excuse. The pope’s intent, however, is not to relieve priests of their personal responsibility for what he called a “heinous crime” and a grave sin, but to dig for some deeper reasons behind what happened.

“I think that needs to be better explained, and I’m sure he will in his letter,” said one Vatican official, speaking of the pope’s pastoral letter to the church in Ireland, which was expected before Easter.

The papal letter will not be the final word, though. One lesson of the Vatican-Irish meeting was that the pope and his aides do not intend to micromanage this crisis for the Irish bishops.

As Archbishop Martin of Dublin said after his return to Ireland, “I believe the future of dealing with this question is in the hands of the Irish church.”