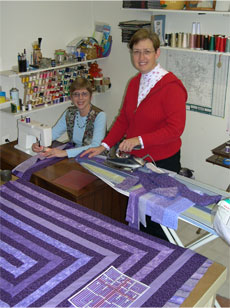 With a little creativity and a lot of love, parishioners of St. Katharine Drexel in Frederick have found a way to transform their gymnasium into a beautiful worship space for weekend liturgies.

Formerly a mission of St. John in Frederick and then an independent mission, St. Katharine became its own parish this summer. Until a church can be built, the growing community worships in a gymnasium at St. John Regional Catholic School – located along Opposumtown Pike on property purchased by the parish.

Becky Mathsen and Margaret Procario, parishioners of the 700-family faith community, have created a series of large quilted banners that are hung on an otherwise unadorned cinderblock wall behind the sanctuary area for liturgical celebrations.

The colorful 8-foot by 10-foot quilts are based on themes developed by parish committees for Advent, Lent, Easter and other liturgical seasons. “We’ve received such an enthusiastic response,” said Ms. Procario, who also serves as president of the pastoral council. “People really seem to appreciate it. It sure beats looking at a cinderblock wall.”

To make each quilt, Ms. Procario and Ms. Mathsen purchase about 30 yards of fabric. Each banner takes about 100 “woman hours,” Ms. Procario said, with the final product made by connecting cloth pieces together. A current Advent banner carries the theme, “Light of Justice,” and features bright blue and turquoise rays of light.

Each liturgical season, the banners seem more beautiful than the one before, according to Father Keith Boisvert, pastor. He said the parish is blessed to have Ms. Mathsen and Ms. Procario share their talents. They help create a sense of “sacred space” for worship, he said.

“They do this with such love for their faith and devotion to their parish,” Father Boisvert said.

St. Katharine parish has also introduced greeting cards and holy cards inspired by the banners. Many of the holy cards are given to sick parishioners, those in nursing homes and shut-ins as a way of helping them feel connected to the parish, Ms. Procario said.

“It’s a form of evangelization,” she explained.

In addition to the banners, the parish has made use of special lighting to enhance liturgies, Ms. Procario said. This coming Lent, she noted, the theme will be “Repent! Return! Rejoice,” and at the beginning of Mass the worship space will be dark and each of the three words will be projected in white light, one at a time, during the three parts of an arrangement of the Kyrie that is being prepared by the music director.

On Pentecost, in addition to a red banner, red frontals and red flowers, the space behind the altar is festooned with red balloons, which are given to the children at the end of the Masses, Ms. Procario said.

St. Katharine is currently beginning a capital campaign to erect a small church that will eventually be converted into a social hall when a larger church and parish offices parish buildings are established, Ms. Procario said.

Will the banners be used in the new church?