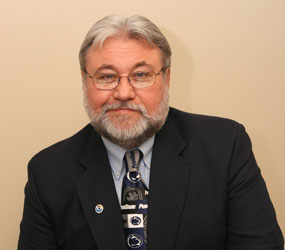 Richard Kane’s love of weather began when he was a teenager crabbing the Chesapeake Bay’s Hart-Miller Island. In order to maximize his catch for the day, which paid his tuition at Baltimore’s Archbishop Curley High School, Kane had to vigilantly monitor tides, winds and approaching storms.

His love for weather continued to grow, leading Kane to enlist in the U.S. Navy, where he gained experience at the U.S. Fleet Weather Central/ Joint Typhoon Warning Center in Guam.

During his time in the Navy, he also worked at a large computer center in California and at the Patuxent River Naval Air Station.

After leaving the Navy in 1979, Kane entered The Pennsylvania State University, where he earned a bachelor’s and a master’s degree in meteorology.

“I love the weather,” said Kane, a husband and father of two. “It is a fascinating field, and I enjoy it every day. “

He considered the National Weather Service “an outstanding agency,” and knew that’s where he wanted to work.

Kane’s career as a forecaster has taken him from Albany, N.Y., to Sterling, Va., to a apposition in Pittsburgh as the warning coordination meteorologist for the National Weather Service. In that capacity, Kane served as a liaison, working with the public and the media.

While experience and technology have made him a better forecaster, Kane said those in the weather field need to always keep in the back of their minds that they could be wrong.

“Many times I think only God knows for sure what’s going to happen because, again, you often get humbled,” Kane said. “We forecast the best we can with the tools we have, but it is a challenge to deal with nature.”

Kane, who loves the weather and winter storms, said he does feel good when he hits a forecast. “It’s pretty satisfying when we can help people prepare themselves against severe weather,” he said.

He credited his Archbishop Curley education with springboarding him to his career.