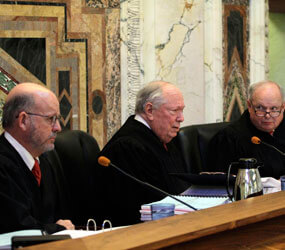 SAN FRANCISCO – A three-judge panel of the 9th U.S. Circuit Court of Appeals in San Francisco Dec. 6 took up the question of the constitutionality of California’s voter-approved ban on same-sex marriage, a hearing that may well have been a prelude to a U.S. Supreme Court ruling on the initiative.

A group of faith-based supporters of Proposition 8, including Catholics, along with Imperial County, is appealing an Aug. 4 ruling by U.S. District Court Judge Vaughn Walker that the initiative is unconstitutional under the due process and equal protection clauses of the 14th Amendment to the U.S. Constitution.

Proposition 8 – approved by more than 7 million voters in 2008 – provides that only marriage between a man and a woman is valid in California.

In a separate ruling Aug. 12, Walker said same-sex marriages in California could resume unless a higher court were to issue a stay within six days. On Aug. 16, a three-judge panel of the 9th Circuit issued the stay, preventing such marriages while the case was being appealed.

It was another three-judge panel of the appeals court that heard the oral arguments, but it may be several months before the judges issue their ruling, which could then be appealed to the full circuit court or directly to the Supreme Court.

The judges could conclude, however, that the Proposition 8 supporters lack legal standing to bring the appeal in the first place. The hearing was devoted first to the question of standing and then the constitutionality issue, and the judges sharply questioned whether the supporters of the initiative could demonstrate they have been harmed by it.

Judge N. Randy Smith, in particular, was bothered by the fact that the deputy clerk of Imperial County, Isabel Vargas, who issues marriage licenses but who is not the elected clerk, is appealing the case. “If the clerk is not here we have a problem,” said Smith.

Imperial County is in the far southeast part of the state. Voters there overwhelmingly supported Proposition 8.

Legal standing became an issue when California Gov. Arnold Schwarzenegger and Attorney General Jerry Brown – who succeeds him in office Jan. 3 – both refused to challenge Walker’s ruling and defend the initiative.

Judge Stephen R. Reinhardt of the 9th Circuit noted that if the state does not defend it, “it’s just tossing in the towel.” He added, “The governor is not allowed to veto this measure, but he can in effect veto it” by ignoring it.

In arguing the constitutionality question, the Proposition 8 supporters stressed that the support of a majority of voters reflects the notion that “the people themselves are a tribunal,” said Charles J. Cooper, a Washington lawyer representing the supporters of the initiative.

At a news conference, he added that “for the plaintiffs in this case to prevail, they have to show that all of the state and federal appellate courts that have addressed this issue – all of whom supported marriage laws and have rejected the same arguments essentially that have been advanced here – that those decisions were irrational and that a large majority of the population of this country is irrational, behaving not in good faith. That position, we believe, is not sustainable and not valid.”

Throughout the hearing, lawyers for the plaintiffs, Theodore Olson and David Boies, both of New York, challenged the standing of the initiative’s supporters and insisted they had not suffered harm from the proposition’s passage and is required to entitle them to appeal the case. It is gays and lesbians who are harmed, the plaintiffs’ lawyers said.

“Depriving our gay and lesbian citizens of their right to marry harms them and harms the children of their union,” said Boies. “And third, there is simply no basis whatsoever for any rational belief that doing serious harm has any benefit for anyone in our society. Quite the contrary. Discrimination hurts everyone and discrimination against gays and lesbians hurts everyone in this country.”

Brian Raum, senior counsel for Alliance Defense Fund, a group supporting Proposition 8, said in a statement: “What’s at stake in this case is bigger than California and bigger than even marriage. Americans are concerned about how marriage, voter rights, religious liberty and other issues will be affected nationwide if this lawsuit is allowed to prevail.”

Proposition 8, approved by voters by a margin of 52 percent to 48 percent, overturned a 2008 California Supreme Court ruling that permitted same-sex unions.