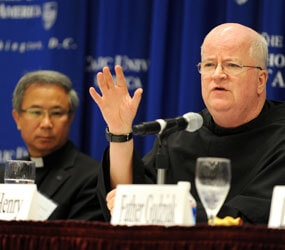 WASHINGTON – Presidents from Catholic universities around the world gathered together at The Catholic University of America April 12 for a round-table discussion addressing faculty and student interaction.

“Let us be courageous, let us not worry about the numbers,” said Father Borys Gudziak, president of Ukrainian Catholic University and a member of the advisory committee who helped prepare the symposium.

In honor of President John Garvey’s inauguration in January, Catholic University continued its theme of “Intellect and Virtue” with a two-day symposium on the idea of a Catholic university. Five of the 10 advisory committee members – all presidents of Catholic universities – concluded the event by joining in a panel discussion about issues facing Catholic education.

Father Gudziak said universities should not always worry about statistics and numbers but “allow our intellect to create the framework.” He said his university, where there is a high rate of AIDS and alcoholism, builds upon the pillars of the courageous Eastern martyrs, service to the poor and the teaching methods of the faculty. He said the faculty must know how to love.

Among the other college presidents joining Father Gudziak were Franciscan Father Terence Henry of Franciscan University of Steubenville; Father Johan Yeong-Sik Pahk of Catholic University of Korea; Dominican Father Brian Shanley of Providence College; and Thomas Keefe of the University of Dallas.

Keefe said colleges need to stop “picking” at each other and focus on “Ex Corde Ecclesiae,” an apostolic constitution issued by Pope John Paul II that identifies the mission of Catholic higher education. They should be talking about what they are doing for their students instead of pointing out the errors of other colleges, Keefe said. He echoed the words of Pope John Paul II, saying we should crave knowledge because knowledge will bring truth which is Jesus Christ.

He said a fundamental mission for faculty is to “love the student.” Although statistics showed that single-sex dorms on campuses help students lead more virtuous lives, he said what they really need is love and role models of love.

Father Shanley, president of Providence College since 2005, said presidents and staff spend a lot of time on curriculum and not enough time on culture.

“When you want to diversify your faculty, you need to be proactive,” he said.

When hiring faculty members, he said he requires them to write about how they would carry out the mission of the college. He said he personally interviews each new faculty member, but knowing how to hire devout Catholic/Christian professors who would be models for the students is difficult.

“Rome wasn’t built in a day,” said Father Henry, adding that Catholic colleges have the opportunity to continue the church’s mission to evangelize in the midst of Hollywood and mass media influences.

President Garvey praised his fellow presidents for coming to share their knowledge.

“It was substance, it was focused and I would like to see it happen every year,” said Father Henry.