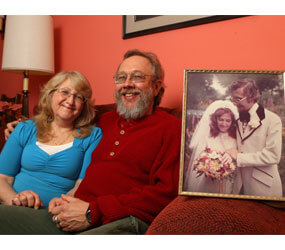 For some men, it’s a woman’s smile, her eyes or a sweet disposition.

A young Ken Katafiasz knew Rosie was special when his future wife ordered a “5-Way” special at Skyline Chili in Cincinnati.

The sight of her tackling a spaghetti dish covered in chili, cheese, onions and red beans caused Ken to say, “This woman can eat a 5-Way? She’s alright!”

The memory brings laughs to the happily married couple of 35 years. The parishioners of Pasadena’s St. Jane Frances de Chantal were one of many couples celebrating World Marriage Day Feb. 14. Archbishop Edwin F. O’Brien marked the day by celebrating Mass at the Cathedral of Mary Our Queen in Homeland.

“I think we’ve grown up together,” Rosie said. “You never grow up enough. You’re always developing.”

The Katafiaszes and couples like Annette and Chris Mulry recently heard about a Web site called www.foryourmarriage.org, an initiative of the United States Conference of Catholic Bishops, which seeks to equip couples with resources for a lasting relationship.

Annette said the site could be beneficial to young couples.

“I think it can be very resourceful,” said Annette, who has been married to Chris for 25 years. “Sometimes we looked at it and thought, ‘Oh, yeah, we’ve lived that already.’ I thought it had a lot on there, and we were just going from topic to topic.”

Rosie was engaged by questions on the site that asked, “What did you do for your marriage today?”

“You don’t marry someone because you want to make them unhappy,” she said. “We try to do things that make the other person happy.”

The Mulrys are parishioners of Church of the Holy Apostles in Gambrills. They began dating as high school juniors and found that they were both from large Catholic families.

“Although our personalities are different, our core values are not,” Annette said. “I see him being much more adventurous, very outdoorsy and athletic. I don’t like taking chances. We’ve probably evolved over the years. We complement each other.”

She continued, “He’s my best friend. To me, marriage is a promise made under God. It’s more than a piece of paper. There’s a commitment there. I can really say that we’re blessed.”

Ken and Rosie met while they were students on a retreat at the University of Cincinnati. They spent a night talking. A few days later, Rosie baked him a birthday cake and brought it to the campus’ Newman Center. She struck up a conversation with a woman there who then identified herself as Ken’s girlfriend.

“I wasn’t a player, but I was dating a few women at the same time,” Ken playfully admitted.

“He was playing the field,” Rosie joked.

Ken eventually saw Rosie as a woman worth concentrating on full-time and found a best friend.

The Katafiaszes have been involved in marriage prep classes at their parish for years.

“I think we started doing it once we realized we had a pretty decent marriage,” Ken said. “We thought, ‘We’ve got something going right.”

Few things have brought them together more than the death of their second of five children, Amy. She was born with a hole in her heart and died at the age of 2. The loss was overwhelming.

“We went to church the Sunday after she died and when they said, ‘Pray for Amy Katafiasz,’ I felt wrapped in God’s love,” Rosie said.

The couple plans a regular Valentine’s Day weekend trip to Annapolis to focus on one another.

“I think we are more mature in our love,” Ken said. “We do little things for each other. We’re aware of the other’s feelings and giving it 100 percent.”

For more on the couples, visit Matt Palmer’s blog at www.catholicreview.org.