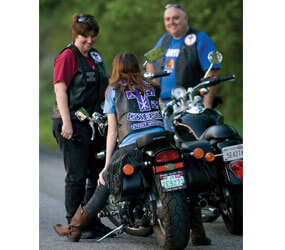 BROKEN ARROW, Okla. – You may see them riding their motorcycles at March for Life rallies, motorcycle rallies, Knights of Columbus and Girl Scout meetings. They look like bikers, but their goal is far different.

Although Christian motorcycle ministries have been around for a long time, most chapters of the national Christian Motorcyclists Association are connected with Protestant or nondenominational churches. The Catholic version of this evangelical ministry is new.

The origins of Catholic Cross Bearers and its arrival in Oklahoma are tied to a convicted murderer from Cleveland and a former paramedic and law enforcement officer from Watertown, Conn.

Stanco and his wife, Jessica, started riding motorcycles shortly after they married in 1988, and it quickly became their favorite pastime. Their hobby was put on hold when their daughter, Alyx, was born in 1993.

A career change and job transfer brought the Stancos to Oklahoma in 2001, and the cradle Catholics joined St. Anne Parish in Broken Arrow.

All three Stancos became active in their new church home and in community activities. Volunteer work in the Knights of Columbus, Girl Scouts, religious education classes at St. Anne’s, Vacation Bible School, Catholic Charities’ Hispanic Help Center and other activities keep the family busy, as do Stanco’s studies toward a bachelor’s degree in pastoral ministry from the Pastoral Studies Institute, the Diocese of Tulsa’s adult religious formation program.

In the midst of all this activity, Stanco said, God led them back to motorcycles. While attending a family funeral in Watertown, an old friend approached them with an offer they couldn’t refuse.

“He had two perfectly good motorcycles in his garage that he wanted to sell us. The price was right, so we bought them and had them shipped back to Oklahoma,” he said. “Alyx was old enough to start riding, so she took a motorcycle safety course, and we bought her a bike so she could join us.”

The Stancos were back on the road. They wanted to merge their hobby with their first love, the church, so they joined the Christian Motorcyclists Association.

“They’re really wonderful people, and we have – and will in the future – attended their events, but there are theological differences,” Stanco said. “They were uncomfortable with our devotion to Mary and the Eucharist. So I started looking on the Internet for something more Catholic.”

That was in the summer of 2009. Stanco’s Internet search quickly landed him on the website of the Catholic Cross Bearers Motorcycle Ministry, founded just a few months earlier by Eric “Shotgun” Wardrum, who had just finished serving 18 years in an Ohio prison.

“I e-mailed him about starting an Oklahoma chapter,” Stanco said. “I believed that his return to the church was genuine. He realized the extent of his sin, and since his release he had become very active in his local parish.”

Wardrum admits that he strayed far from his Catholic faith. Convicted in 1990 of killing a 28-year-old Cleveland man, the avid biker said that “it seemed at the time that no matter how hard I tried in life, I could not succeed.”

“I realize now that this was because I didn’t put God first in my life and seek his will in all things,” he said. “But somehow, I never lost my love for Jesus or my Catholic identity.”

During his years in prison, Wardrum developed the idea of a Catholic motorcycle ministry, but it wasn’t until he came closer to eligibility for parole and was moved to a lower-security prison dorm that “God finally put the final 2×4 upside my head,” he said.

In the bunk next to him was a former member of an infamous motorcycle gang who had converted to Christianity. For nearly two years, Wardrum’s new friend encouraged him to pursue his plans. “He told me, ‘You need to do this, even if you are the only one doing it,’” Wardrum said.

In the fall of 2008, Wardrum founded the Catholic Cross Bearers, and a year later the Stancos became the second, third and fourth members of the organization. Today, the growing ministry has members in Oklahoma, Ohio, Iowa, Illinois, Pennsylvania, New York and Maine.

“Our main goal is evangelism,” she said. “Whenever we walk into an event wearing our colors, people start asking questions and, you’re there. The rest is easy. It’s making that initial contact that’s hard sometimes.”

For more information on the Catholic Cross Bearers Motorcycle Ministry, visit their website at www.catholiccrossbearersmm.com.