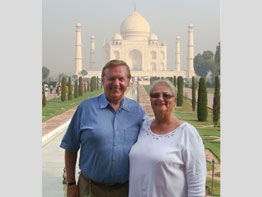 BOSTON – The prayers of family and friends and the rosary helped a Brockton couple endure a 15-hour ordeal waiting to be rescued from their room in the Taj Mahal Hotel in Mumbai, India, which came under siege from terrorists Nov. 26.

William and Geraldine Stadelmann were on the last day of a three-week tour of India, which included a visit to the tomb of St. Thomas the Apostle in the city of Chennai, formerly known as Madras. The following day, the couple was to depart with a smaller tour going to Nepal to see Mount Everest.

The India leg of the trip concluded with an afternoon reception on the hotel’s ground floor for the tourists, many of whom William Stadelmann said stayed downstairs for dinner, while he and his wife returned to their room to pack for their 4 a.m. departure for the airport.

“At the party we were all saying how safe we felt in India,” he said in a Dec. 2 interview with The Pilot, Boston archdiocesan newspaper.

At or around 10 p.m. there was a loud explosion.

“I thought it was fireworks,” he said.

Next, he said, came a call from the hotel security, who told him there were gunmen in the hotel and he should turn off the lights, lock the door and open it for no one. For the next 15 hours, the couple stayed under their bed.

From under the bed, the couple could hear terrorists move down the hallway, pound on each door and use an explosive that sounded like a grenade. “They would blow the door open and start shooting everyone inside,” Mr. Stadelmann said.

There was at least one gunman perched high over the atrium firing into the rooms and down upon the people running across the bottom of the atrium to escape the hotel.

With the sniper outside, he said his wife did not want to risk getting up and going to the bag with her rosary beads, so she used her knuckles to keep track, he said. “Of the 15 hours, my wife was saying the rosary for, I’d say, 14 and a half hours.”

Meanwhile, Mr. Stadelmann said he used his laptop equipped with an international wireless Internet card to maintain contact with his family back home.

Beyond the explosions and the gunmen going door-to-door, the greatest danger to the couple was the fire, he said. “There were 1,000 rooms in the hotel, so I figured our chances were pretty good. But, the fire was really something. A fire will find you.”

Stadelmann opened the windows just a crack and he put wet towels at the bottom of the doors to block the smoke that was filling the hotel, he said. To breathe, he and his wife covered their noses with wet towels, too.

Because their section of the hotel was constructed of concrete, he said, he was confident the structure was sound, even when the roof of the atrium caught fire and its flaming pieces streamed down past their window.

When help arrived, it was a team of six Indian Army special forces soldiers dressed in black uniforms with black bandanas on their heads, he said. “They had everything, guns, knives and radios. They were the real deal.”

Along the way, the group had to walk past five or six bodies and at each one his wife stopped to make the sign of the cross, he said. Of the more than 170 killed, one was a man from Australia the coupled befriended on the tour.

“The Indian people are wonderful,” he said. Many of the hotel staff risked their lives or were killed trying to help guests get to safety. Their Hindu culture teaches them to be kind and concerned for others.

Mr. Stadelmann said those rosaries and the prayers of his friends and family back home were the reason they lived through the ordeal.

“We have a tremendous faith and we were getting prayers from all over the place,” he said.