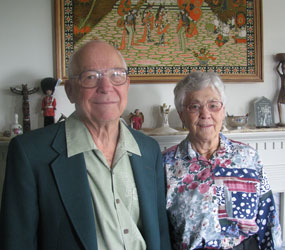 ADAMSTOWN – As the 2000s approached, Sam and Delores Keiters were nearing their third decade of living in Montgomery County’s Silver Spring.

Delores was approaching her early 70s and Sam his late 60s. They wanted to downsize their living space without downsizing their belongings too much.

They researched 22 different retirement communities and found an advertisement for Buckingham’s Choice, a facility that was slated to open in Frederick County’s Adamstown in late 1999. The location was nestled in the rolling hills of Sugarloaf and the Catoctin Mountains. After looking at the floor plans and seeing the site, the couple signed a contract in 1997 to move to Buckingham’s Choice when it opened two years later.

“When we told people we decided, they said ‘You’re too young to move over there,’” Delores remembered.

Eleven years later, it has become one of the Keiters most forward-thinking decisions.

“We’re busier than when we worked,” said Delores, 83, a former nurse. “We know everybody here,” Delores said.

“Each day is different,” said Sam, 79, who serves as president of the Buckingham’s Choice Residents Association.

The Keiters live in one of 137 private cottages. Their duplex-like home features a large kitchen, dining room, a garage, expansive bathrooms and bedrooms, plus a spacious basement area with scenic views.

The Keiters, and other original residents of Buckingham’s Choice, had an active part in plotting out the development of their living spaces.

The couple added on an enclosed, screened back deck that looks out onto the mountain ranges.

Buckingham’s Choice is owned by Episcopal Ministries to the Aging (EMA), which runs a series of faith-based retirement communities.

“It’s better than any other place we’ve come across,” Sam said.

The facility also offers 80 first-class apartments and amenities that include a health and fitness center, a heated indoor pool, a woodworking shop, library, arts studio, billiards and card room, a greenhouse, an on-site outpatient clinic and rehabilitation department, a dining room, bar and grill and coffee shop. A full-service bank, resident art gallery, gift shop, beauty and barbershop and an in-house television station are also offered.

Residents make decisions about the course of their day.

“They don’t pressure us,” said Delores, of the staff.

Delores, a Catholic, serves as an extraordinary minister of holy Communion for a local hospital and residents of Buckingham’s Choice and goes to Mass at Buckeystown’s St. Joseph on Carrollton Manor.

Sam plays bridge with Montgomery County friends and the couple sings with other residents. At one time, Sam was a member of a Buckingham’s Choice barbershop quartet. They also take part in a Meals on Wheels program.

“We like this place very much,” Delores said. “We tell people that when they’re in their 80s, it’s much harder to get adjusted. Do it when you’re young.”