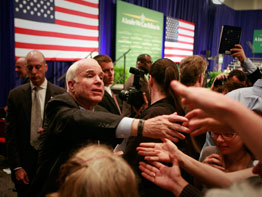 WASHINGTON – With the two major parties’ nominees for president apparently decided and attention turning to their vice-presidential choices, an old question inevitably arises in certain circles – how to corral the “Catholic vote” in November.

“Politicians and media people love to think there is” a Catholic vote, said John Farina, an associate professor of religious studies at George Mason University in Fairfax, Va. “And the political parties are always able to find people who will tell them there is a Catholic vote and this is how you get it.”

But that does not make it so, added Prof. Farina, who believes that “most Catholics base their votes on reasons other than their Catholicism” – because they are blue-collar or white-collar, Hispanic or not Hispanic, white or black, military veterans or not.

Some commentators have made much of the fact that exit polls showed Catholic voters favoring Democratic presidential candidate Sen. Hillary Clinton over the presumptive Democratic nominee, Sen. Barack Obama, sometimes by a wide margin and particularly in some of the “swing states” seen as crucial to a Democratic win in November.

That has led to speculation that Obama might have a “Catholic problem” when he runs against the expected Republican nominee, Sen. John McCain, in November. Sen. Clinton’s Democratic supporters who are Catholic might not transfer their allegiance to Obama but might instead vote Republican, the argument goes.

Catholics currently make up 23.9 percent of the U.S. population, according to the U.S. Religious Landscape Survey of the Pew Forum on Religion & Public Life.

Looking at the question from the opposite angle, Douglas Belkin of The Wall Street Journal recently wrote that “the observant white Catholic vote” – generally considered reliably Republican because of issues such as abortion and embryonic stem-cell research – “might be up for grabs” this year because Catholics “appear to be more concerned about the economy and the war in Iraq.”

Chris Korzen, executive director of Catholics United, a nonpartisan group organized to promote the principles of Catholic social teaching in political discourse, said in a commentary for the Huffington Post that Mr. Belkin’s story was “nothing short of old news” for those who “work in the Catholic trenches.”

“Republicans and Democrats alike take note: Catholics – conservative or otherwise – have always been in play,” he wrote. “However concerned about issues like abortion and same-sex marriage Catholic voters might be, these matters are part of a larger package of moral concerns that bear directly on the common good.”

David Carroll Cochran and his father, Clarke E. Cochran, were wrestling with some of the various issues that Catholic voters have to balance when they decided to write “The Catholic Vote: A Guide for the Perplexed,” published earlier this year by Orbis Books.

“If you take all Catholics together they don’t constitute a single voting bloc, although there are some groups that have certain patterns,” said David Cochran, an associate professor of politics at Loras College in Dubuque, Iowa, and director of the Archbishop Kucera Center for Catholic Intellectual and Spiritual Life at the college and the Archdiocese of Dubuque.

David Cochran and his father, a professor of political science at Texas Tech University in Lubbock, wanted to explore “more than just the empirical data,” he told Catholic News Service in a June 4 telephone interview. They wanted to help other Catholics grapple with the complex topic of how Catholic social teaching should affect their votes.

Faced with those on one side who believe that one issue – abortion – “trumps all others” in making electoral choices and those on the other side who think the whole range of issues on which Catholic teaching takes a stand should be given equal weight, the Cochrans came down on the side of neither.

Although certain issues – including abortion, stem-cell research, war and peace and economic justice – are “always on the table,” David Cochran said, others might become more important in one election than another. In 2008, those issues would include immigration and torture, he said.