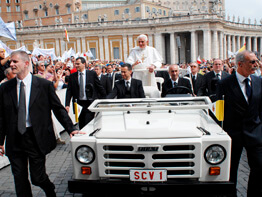 VATICAN CITY – Pope Benedict XVI’s security guards are known for composure under pressure, and they showed it when a deranged German tried to jump onto the pope’s jeep at a general audience.

Within seconds, 11 Vatican plainclothes agents – Swiss Guards and policemen – subdued the 27-year-old man and pinned him to the ground. He was unarmed, and the pope was unharmed in the June 6 incident.

The whole thing happened so quickly and quietly that it went unnoticed by most people in the square, including the pope. No guns were drawn and no alarms were sounded. The pope’s jeep never sped up, and most of the faithful, even those right in front of the scene, just kept snapping pictures of the pontiff.

It was a classic display of the Vatican’s elegant and understated approach to security, which relies more on intuitive alertness than a show of force.
But despite the official sighs of relief, episodes like this inevitably raise apprehensions. With the pope passing through tens of thousands of people in an open jeep each Wednesday, it’s very difficult to prevent an overly enthusiastic or mentally unstable person from running toward him.

Except during bad weather, popes riding through St. Peter’s Square generally have not used the covered popemobile, which has bulletproof glass. Even after he was shot in the square in 1981, Pope John Paul II continued to use an open jeep for such appearances.

The whole idea, of course, is for the pope to get close to those who came to see him. The papal vehicle crisscrosses the lanes that divide seating sections in the square, about an arm’s length from the people in the crowd, so that everyone can get a good look and a photo.

Tickets are required to attend the pope’s general audience, but they are easily obtainable.

Since the pope insists on being out in the open, the Vatican relies on subtle layers of protection. Most importantly, before entering St. Peter’s Square all pilgrims now pass through airport-style metal detectors and have their bags searched, in an operation carried out by the Italian police force assigned to the area around the square.

The metal detectors and bag checks were introduced during the Holy Year 2000, but were used much more routinely after the Sept. 11, 2001, terrorist attacks.

The Italian police agents patrol St. Peter’s Square when it’s not being used for audiences, ceremonies or liturgies. But during papal events, the Vatican’s own security teams take over.

The Vatican’s uniformed gendarme agents and Swiss Guards are stationed throughout the crowd, and they are trained to notice potential troublemakers.
The more elite security contingent that accompanies the pope’s jeep typically includes the head of the Vatican gendarme corps and Swiss Guards. Dressed in suits, this team of about 10 agents walks briskly alongside the moving vehicle, scanning the route and the crowd for potential problems.

Vatican security officials have hinted that on some occasions, sharpshooters keep vigilance over papal events from Vatican rooftops adjacent to the square.

Perhaps the biggest problem facing the pope’s “guardian angels” is distinguishing a real threat from a pilgrim’s overexuberance. Most of the people who have tried to rush the pope – and there have been many over the years – said they only wanted to be near the pontiff.

One of the best-remembered episodes was during World Youth Day ceremonies in 2000, when a young man broke through a buffer zone and “materialized” on the papal stage, as one security agent later described it. Pope John Paul reacted by giving him a big hug; then the youth was led away.

At a Vatican canonization Mass in 2002, a German man leaped barricades and was blocked near the altar. He said he wanted to hug the pope.

Such episodes are not infrequent on foreign trips. In Regensburg, Germany, last year, a young man wrapped in a Vatican flag was tackled as he tried to break through to a papal altar. During Pope Benedict’s previous trip to Spain, a man got close to the moving popemobile before he was stopped.

In 2002, as Pope John Paul celebrated a Mass in an Azerbaijani gym, a shouting refugee on crutches managed to hobble almost to the pope’s chair before he was blocked. The man said he wanted to have his picture taken with the pope and give him a booklet about Mount Ararat; at the end of the Mass, he was led back for a papal blessing.

If Vatican security seems low-profile during papal events, that is not true during visits by foreign dignitaries.

President George W. Bush, for example, was to see the pope June 9. The last time he came to the Vatican, his motorcade of armor-plated SUVs roared through St. Peter’s Square, which had been closed off for hours for the presidential passage.