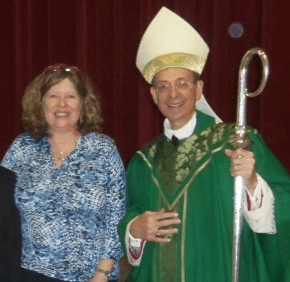 Sylvia “Cookie” Harris, one of the leading pro-life advocates in Maryland and a longtime parishioner of St. Joseph in Cockeysville, died suddenly Aug. 28, a few days before what would have been her 58th birthday.
In a written statement released Aug. 28, Archbishop William E. Lori noted that Harris served on the archdiocesan Respect Life Committee and the Board of Directors of Pregnancy Center North, a Towson-based crisis pregnancy center for women who wish to carry their babies to term.
Harris, who was born in Puerto Rico, served as a peer counselor to Spanish-speaking women at the pregnancy center and spoke to eighth-grade Catholic school students about the sanctity of human life.
The wife of Republican Congressman Andy Harris for more than 30 years, she was also the director of special events for Maryland Right to Life.
“Mrs. Harris was a tireless supporter of life and fully dedicated herself to the belief that all human life is sacred,” Archbishop Lori said. “Though her death is a tremendous loss, especially to those in the pro-life community, her legacy will continue to live on in the countless lives she not only touched, but possibly saved, through her efforts to build a culture of life in the Archdiocese of Baltimore.”
Kristen Shea, a parishioner of the Basilica of the National Shrine of the Assumption of the Blessed Virgin Mary in Baltimore, described Harris as a “wonderful mentor.” Shea began volunteering at Pregnancy Center North several years ago, working her shift with Harris.
“She calmed all of my fears and taught me with passion, patience and energy,” said Shea, a nurse at Johns Hopkins Hospital in Baltimore. “I will never forget her patience, zest for life and especially her passion for the pro-life cause and her love for the Catholic faith.”
Shea said Harris obtained a picture of Our Lady of Guadalupe, patron of unborn children, which Harris was “excited” to hang in the pregnancy center.
“She was loving, energetic, talkative and family-oriented,” Shea said.
Deacon Richard “Monti” Montalto, a deacon at St. Thomas Aquinas in Hampden, worked with Harris on the Respect Life Committee, Maryland Right to Life, Pregnancy Center North, the Gabriel Network and the Maryland March for Life.
“We spent a lot of time together driving to various meetings and she would share her love for her husband, Andy, and their family,” Deacon Montalto said. “I remember a moment at a pro-life dinner when a Hispanic volunteer was having difficulty getting her point across and Cookie went from English to Spanish, which was the first time I learned that she was from Puerto Rico. She was a fine lady and good friend.”
Long active in lobbying on behalf of pro-life causes, Harris was a familiar figure in Annapolis. The Maryland Catholic Conference, legislative lobbying arm of the state’s Catholic bishops, expressed its gratitude in a statement, saying: “We are most grateful for her years of pro-life advocacy on behalf of the unborn and their mothers.”
Harris, mother of five and grandmother of two, was an occasional columnist for the Catholic Review, writing on pro-life matters.
“We must speak for those who cannot: the unborn, the incapacitated, the old and infirm – and we must challenge mistaken policies of our government,” she wrote in a 2009 column prior to the March for Life in Washington, D.C. “If abortion continues to be legal, we must make sure it does not do so unopposed. We proudly and peacefully march to give witness to the fact that a policy that allows the killing of thousands of innocent children a day cannot, will not and must never be accepted passively by the people of any civilized country.”
Harris studied elementary education at what is now Notre Dame of Maryland University in Baltimore. She was a former teacher at St. Joseph School in Cockeysville, where she sent her children.
In a Facebook post by the school, Janine Paetow, assistant principal, said the community is “deeply saddened” by the loss.
Mary Beth Lennon, president of Mercy High School in Baltimore, was one of Harris’ first students at St. Joseph School.
“She was a very warm and kind teacher, a new graduate of the College of Notre Dame when she first started teaching us,” Lennon said. “She was very strong in her faith, and I remember her excitement around helping us prepare for First Reconciliation.”
A statement released on behalf of Congressman Harris said the family is “thankful for the thoughts and prayers that so many have offered already and appreciates privacy during this time.”
A funeral Mass will be offered at 11 a.m. on Sept. 1 at the Cathedral of Mary Our Queen in Homeland. Visitation is Aug. 31 from 1 to 8 p.m. at Ruck Funeral Home in Towson.