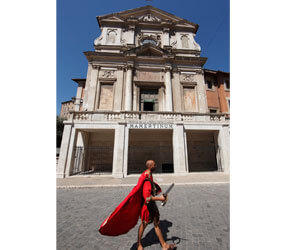 VATICAN CITY – Tradition holds that St. Peter was jailed in Rome’s maximum security Mamertine Prison before he was crucified upside down and buried on the hill where St. Peter’s Basilica was later built.

And now after recent excavations in Rome’s oldest prison, archaeologists say they have uncovered evidence that, while not providing direct proof, does support that belief.

The prison, which lies beneath the Church of St. Joseph of the Carpenters facing the Roman Forum, was closed for the past year as experts dug up old floors and picked away plaster.

Patrizia Fortini from the city of Rome’s department of archaeological heritage led the excavation and restoration project. She told journalists July 27 they found proof that the site had been a place for venerating St. Peter by the seventh century, lending support to historical accounts that he had been incarcerated there.

In the Tullianum, Fortini said, they found “traces of a basin that must have been where water was collected – water which, according to tradition, sprang forth after St. Peter pounded on the stone floor.”

Tradition holds that after he miraculously made the water gush forth, he converted and baptized his two prison guards as well as 47 others while he was imprisoned there.

Near the basin, archaeologists found a trough which, centuries later, the faithful may have used to sprinkle themselves with water, she said.

The stone walls had been painted, she said, but time and humidity took their toll.

There is only one small fresco left in a dark corner under the stairs. The ninth-century image, discovered in 2000, shows the outline of the hand of God emerging from a white cloud as he points down toward Earth.

A portion of the marble column, which tradition says Sts. Peter and Paul were chained to, stands next to a simple altar.

One of the most interesting finds, Fortini said, was discovering what the Tullianum had been used for in pre-Christian, pagan Rome.

Scholars had believed the domed prison was a cistern or a monumentalized fountain of sorts. Instead, Fortini said it had been “an ancient place of worship” specifically devoted to a water divinity such as “a nymph of underground water.”

They found ancient remnants of votive offerings to the deity, things such as small burned animal bones and floral or vegetable matter dating from between the fifth and third centuries B.C.

From the ancient pagan Romans to early Christians, “this place was always venerated. It never lost its sacredness,” Fortini said.

It may seem odd, however, that the ancient Romans took a sacred pagan spot for venerating the life-giving and healing powers of water and turned it into a dungeon.

Fortini said the underground water spring also conjured up many negative and dangerous scenarios. For example, in pagan Rome it was thought the spring provided a direct channel to the netherworld, she said.

Archaeologists found an ancient borehole going 5 feet into the ground. The borehole “put the inhabited world into contact with the underworld and, therefore, there was the possibility of having contact with the beyond somehow,” she said.

Enemies of the Roman Empire were thrown into the watery pit of the Tullianium through a hole in the upper chamber of the Carcer. Romans believed the prisoners would then be carried away or just disappear into the netherworld – a fate worse than death, she said.

The structure was used a prison until the fourth century, when Pope Sylvester I officially made it place of worship and named it “San Pietro in Carcere” (St. Peter in Prison) in 314.

The Church of St. Joseph was built atop the former prison complex in 1598.

The project to study and restore the Mamertine Prison was a cooperative effort of Rome’s department of archaeological heritage, the Rome diocesan Committee for Sacred Art and Cultural Heritage and the diocesan-related travel agency, Opera Romana Pellegrinaggi.

After the Mamertine Prison reopened to the public at the end of June, the Opera Romana incorporated it into a new tour called “Roma Cristiana Experience,” which was presented to journalists July 27.

Pilgrims hop on a methane gas-powered minibus leaving St. Peter’s Square every 20 minutes and take a scenic route through Rome to the Mamertine Prison for a tour.

The tour is meant to help people deepen their faith and recognize the site’s spiritual heritage: its successive conversion from being a sacred pagan spring, to being a dank place of suffering and death, and finally, after St. Peter made the waters pour forth, to becoming a place of renewal and rebirth.