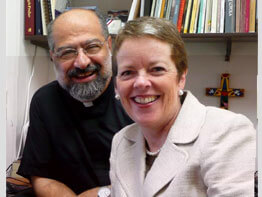 WASHINGTON – In the 10 years since Creighton University in Omaha, Neb., began offering ministry guidance and aids on its Web site, the technology has exploded and so has the audience of the Catholic Web site, which received more than 21 million hits in the past year.

The site has become so popular that a Catholic publishing house in Chicago has published some of the content in book form and sent a complimentary copy to every Catholic parish in the U.S.

“I know that it may sound a little odd that a book would come out of stuff from a Web site, and not the other way around,” said Jesuit Father Andy Alexander, one of the founders of the Web site that inspired the book. “But we’re hoping to expand our audience, and this book will help, especially if parishes begin using it.”

The book, “Praying Lent: Renewing Our Lives on the Lenten Journey,” is a guide for Catholics about how to celebrate an often misunderstood season.

Father Alexander and Maureen Waldron – staff members of the Jesuit-run university’s Collaborative Ministry Office – set up the Creighton University Web site in 1998 to provide daily reflections for the faculty and staff to help them understand the school’s mission.

During Lent that year the daily reflections focused on the 40 days leading up to Easter and provided information about what that period means to Catholics and what the church expects from them.

“At the end of Lent of 1998, when we first went online with daily reflections, a woman wrote to us and said she was visiting Hong Kong and heard about our site from a priest from Baltimore and told us how much our postings meant to her during her time overseas,” Waldron told Catholic News Service. “That’s when it occurred to us, ‘We’re not just a campus ministry. We’re reaching out globally.’”

As they added faculty and staff to their roster of daily reflection writers, they also started hearing from more people from all corners of the planet.

“We started to realize two things,” Father Alexander said. “People were very hungry for spiritual guidance, and the World Wide Web is a very powerful tool.”

With little technical savvy or computer training 10 years ago, Father Alexander, now 60, and Waldron, now 55, learned the ins and outs of Web-site design and maneuvering using the trial-and-error method.

“People kept saying they were too busy to pray,” he said. “So this reviews all of the readings of the week and instructs people how to practice their faith. For lack of a better phrase, it’s religion for the busy person.”

However, the online ministry isn’t a substitute for Mass, Father Alexander said.

“It’s not replacing church,” he said. “This is spirituality online. It helps people strengthen their relationship with God when they are not in church.”

Since they were hearing from people from Saudi Arabia to Siberia, Father Alexander and Waldron translated some of the retreats into Spanish, Japanese and Russian.

“Loyola Press started watching our numbers, and even though they said they had never published anything that had already been available for free, the numbers were staggering,” Father Alexander said. “They asked us if they could put our online retreats in books, so that people can have them in hand.”

Monsignor Damien Nalepa, pastor of St. Gregory the Great in Baltimore, received his copy during Advent and decided to read it sometime in January. However, the idea of a book to help guide members of his congregation through the practical aspects of Lent intrigued him.

“I like the idea,” he said. “This is the kind of tool that I think would be valuable for our parishioners. I am always looking for tools to help Catholics really understand Lent.”

Creighton University’s online ministry site can be found at www.creighton.edu/CollaborativeMinistry/online.html.