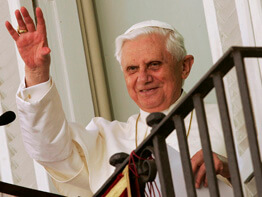 CASTEL GANDOLFO, Italy – The seemingly invincible ideologies of consumerism and hedonism and the reign of violence and terror will all be defeated by God’s love, Pope Benedict XVI said.
“It still seems impossible today to think that God … is the true ruler of the world,” the pope said during his homily Aug. 15, the feast of the Assumption of the Blessed Virgin Mary.
But, in the end, “love wins, not selfishness,” material power and hatred, he said to an audience of several hundred local parishioners.
The pope’s comments came while he celebrated Mass at St. Thomas Church in Castel Gandolfo, where the papal summer residence is located, south of Rome.
Giving his homily without using a text or notes, the pope said that according to St. Augustine, human history has been driven by a struggle between two kinds of love: love for God in which one “loses oneself and gives oneself” totally to him and loving oneself to “the point of disparaging God and hating others.”
Pope Benedict said this selfish love versus true love can be seen in the two images present in the feast day’s first reading from the Book of Revelation, an account of the encounter between the powerful dragon and the defenseless woman.
The dragon, he said, represents “power without mercy, without love, of absolute selfishness, terror, violence” as well as all “materialistic dictatorships” throughout history, including the Nazi and Stalinist regimes.
“Even today the dragon exists in new and different ways,” he said.
It is present in the form of materialistic ideologies that consider God as something expendable or pointless and that maintain life is all about “consumption, selfishness, amusement” and “taking all there is to get in this brief lifetime,” the pope said.
“Once again it seems absurd, impossible to defy this dominant mentality,” especially with the support it gets in the media, he said.
But, “nonetheless, we know that in the end the defenseless woman won” the battle against the dragon, signaling the victory of God’s love, he said.
The woman clothed with the sun and with the moon under her feet represents the Mary “living totally in God … penetrated by the light of God” and conquering death, said the pope.
“She tells us: ‘Have courage. In the end love wins,’“ he said, adding that this love entailed living her life as a servant of God and giving herself totally to God and others.
The feast of the Assumption “is an invitation to have faith in God, to imitate Mary” and “to give our lives, not seize life,” Pope Benedict said.
Love is stronger than hatred, he said, and the seemingly weak God, who came to the world as a baby, is strong. Though faith in God may seem weak against all earthly powers, it “is the true power in the world,” said the pope.
After celebrating the morning Mass, the pope recited the midday Angelus prayer with visitors gathered in the courtyard of the papal villa.
He also greeted via satellite-television linkup young people gathered at the Basilica of the Shrine of Mariazell in Austria, which he is scheduled to visit Sept. 7-9.
During the Angelus address, he said Mary’s assumption, body and soul, into heaven did not mean Mary “has left us, but she is even closer to us, and her light beams down on our lives and on all of human history” as she looks over and protects everyone.
“We all need her help and comfort in order to face each day’s trials and challenges; we have a need to feel that she is our mother and sister in everyday, concrete situations,” he said.
Pope Benedict called on the faithful gathered in the papal courtyard to imitate Mary with a humble devotion to Christ “and generous service” to others.