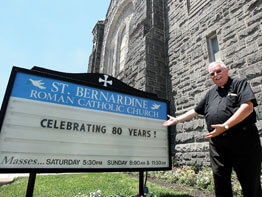 St. Bernadine, Baltimore, isn’t afraid of change. It embraces it

Throughout its existence, the now-predominantly African-American church has come to be known as the flexible backbone of the Edmondson Village community.

“We’re just taking the time to give thanks for how far God has brought us,” said Father Edward M. Miller, pastor of the 2,000-member parish.

When Father Miller arrived in 1975, he quickly realized the parish needed to revamp to increase attendance while keeping the faithful in the pews. At the time, the church had not adjusted to demographic shifts in the surrounding community and Masses were sparsely attended.

“If you would have shot a canon into the middle of the church, you wouldn’t have hit anyone,” Father Miller said.

He developed a plan to secure the church’s place as a neighborhood cornerstone. The goal, he said, was for Baltimore, particularly African-American Catholics, to be reflected in the church.

“It’s who we are,” Father Miller said of his neighborhood. “Anything in the community, we try to be involved. We have to be a good neighbor.”

Father Miller emphasizes a strong focus on the liturgy at Mass and also incorporates other traditions as well. One of the highlights of the Mass is a large gospel choir that is one of the biggest in the archdiocese.

The parish mixes the fun and the serious throughout the week. St. Bernadine’s has been pro-active in social justice issues, including its participation in the archdiocese’s Baltimore/Haiti Solidarity Project. St. Bernadine has a goal of giving $10,000 to its Haitian sister parish this year.

Father Miller said his parishioners have a strong concern for others in need, creating a strong desire to create change outside the United States.

The parish recently embedded itself in the community by holding an arts festival that featured choirs, dancing, poetry and dramatic readers.

The success of the parish, some say, is due to Father Miller’s willingness to delegate authority to his flock.

“Father Miller is very affirming,” said Therese Wilson Favors, director of the archdiocese’s Office of African American Catholic Ministries. “He really makes sure leaders go to the right kind of workshops. He will send them to classes to get certification and encourage them to earn (advanced degrees).”

Ms. Wilson Favors said the parish’s youth ministry program shines because it has dedicated staff members who believe in the children.

“Everyone is incorporated in the church,” she said.

During one of Father Miller’s early years in the parish, envelope collections totaled only $16,000. With its current overflowing membership, cash has followed. The parish school has received a strong commitment from the church, including $1 million since it opened 11 years ago, Father Miller said.

Ms. Favors said the parish and school work together, creating an evangelistic synergy that exceeds the archdiocese’s goals for education.

African-Americans account for 2.5 million members of the Catholic Church, according to the United States Conference of Catholic Bishops, but face declining youth numbers throughout the country,. Father Miller said he wants to prevent the problem occurring in his landmark church.

“If you don’t have a church that appeals to the youth, it will die out,” Father Miller stressed.

Ms. Favors believes that will not happen to St. Bernadine under Father Miller’s watch.

“His outreach in the community,” she said, “is just outstanding.”