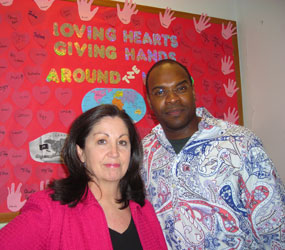 Oblate Sister of Providence Rita Michelle Proctor, principal of Mother Mary Lange Catholic School in northeast Baltimore, looked forward to the day when her school’s namesake, the foundress of her order, would be canonized in Rome.

“The plan was to change the sign on the school,” she said, “but not like this. We opened the school five years ago, never with the intention of closing. Never did I think we would close the door.”

That reality hit Sister Rita Michelle’s school and 12 others around the Archdiocese of Baltimore March 4, as Archbishop O’Brien decided to consolidate elementary and secondary institutions in Baltimore City and Baltimore County. The archdiocese said 2,160 students would be impacted and an estimated 325 employees could be without jobs.

Enrollment declines, financial deficits and aging buildings were among the archbishop’s reasons to consolidate schools.

Angela Calamari, principal of Baltimore’s St. Katharine, met with faculty and staff after hearing the news.

“I had ordered lunch for them, because whether we made it or we didn’t make it, it was a sad day for Catholic schools,” Calamari said. “We all have colleagues in different places.”

She then told the fifth through eighth grades of the school’s consolidation. When students realized Calamari and her staff would not be joining them at nearby Ss. James and John School, they became emotional. Calamari asked students if they trusted her and knew that she and her staff loved them.

“I said, ‘That love never goes away and when you leave, I will give you my cell phone number just in case you need to call me,’” Calamari said. “I said, ‘I know in my heart of hearts you’re going to be OK.’ I was totally impressed by their compassion and strength, because some of these kids have faced addiction and watching their fathers being killed. They still don’t understand, but they’re accepting it.”

“The faculty here is a team,” Ashby said. “They continue to work as a team and support each other. They are tremendous.”

“In some capacity, whether it was the two-room schoolhouse or the four rooms in the undercroft of the church, our school has been on the corner of Smith (Avenue.) and Greely (Road),” she said. “We have kept the Sisters of Mercy tradition alive for that long.”

Mother Mary Lange opened in 2005, a response to the closing of parish schools at St. Dominic, The Shrine of the Little Flower and St. Anthony of Padua, the facility it occupied.

“Among my staff, there’s a definite devastation,” Sister Rita Michelle said. “Some came from the other three schools, they’ve experienced this before. We feel we had enough reasons not to be consolidated.”

St. Rose of Lima principal Madeleine Hobik said “the news has been devastating for many people, impacting many lives. But if we remain focused, we will survive and Catholic education will be stronger.”

“I think (parents) had hopes with a new pastor and with a relatively new principal, we might have a little more time to work together because we did show with the challenge appeal that the community could rally together,” Dates said.

Ashby enthusiastically took the helm at Holy Family this school year with a wealth of experience ministering to young people. The 1988 graduate of Cardinal Gibbons School was ready to establish the school as a “trendsetter” and to work with staff to boost enrollment.

“It’s heartbreaking,” he said. “We worked hard. You can’t fault anybody here. It’s been a great effort.”

The husband and father said he continues to support Catholic education.

Pamela Walters, principal of Sacred Heart of Mary in Graceland Park, was one of the first products from the archdiocese’s Operation Teach program. She has been at the 137-student school for 10 years, the last four as principal.

“I am committed to being where I need to be in Catholic education,” Walters said. “It found me and I’m not going anywhere.”

All principals said they are working to help their staff and students find future homes.

“We do have much to celebrate,” she said. “We hope to have a nice sendoff. We don’t want to have a pity party.”