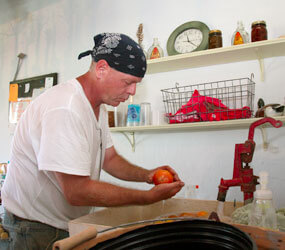 VILLA MARIA, Pa. – A half-dozen 10-gallon buckets of firm, ripe tomatoes crowd the concrete floor of the workhouse room on the Villa Maria Farm that serves as a small store where customers can get a juicy taste of summer. Alongside, buckets of green and yellow peppers, some hot and some sweet, compete for attention. Pungent garlic braids hang overhead.

Everything in the room says the year’s harvest has been very good.

Farmhand Richard Graney gets to work washing the colorfully named orbs: Brandywine Rose, Polish Giant, Valencia, Big Beef and Cherokee Purple. It’s almost lunch time, but Graney wants to get a head start on getting the produce ready for the customers who will shop later in the week at the 250-acre farm, a ministry of the Sisters of the Humility of Mary.

Graney is careful not to bruise the lycopene-rich fruit. Placing the tomatoes in a bucket sink, he begins to rinse them under a gentle stream of water while examining them for blemishes. Graney’s gentle handling of the fruit reflects the deep respect he and his co-workers have for the land, a value instilled by the sisters long ago.

Tomatoes and peppers are just two of the crops raised on the farm, which has been an integral part of the Humility of Mary sisters’ 156-year history in western Pennsylvania. The farm occupies about a third of the congregation’s 726-acre tract that also is home to the motherhouse. Eggplant, soy beans, lettuce, spinach, squash, pumpkins, oats, herbs and fresh cut flowers also are grown on the grounds nestled along the Ohio border 10 miles east of Youngstown.

The crops grown also are used in the meals served at the motherhouse for staff and retired sisters. Half of the crop is harvested for local food pantries and meal programs, said John Moreira, who has worked on the farm since 2006.

“We’re growing the cream of the cream,” he explained.

The farm is one of the many ministries of the congregation, which first settled in Pennsylvania in 1864 when Bishop Amadeus Rappe of Cleveland invited them to the United States to minister to French immigrants and reside on the land then owned by his diocese. In addition to the farm, the site today includes wetlands, a bird sanctuary and nature trails.

Sister Susan Schorsten, major superior, said the farm and ecology ministries are as important as any of the other ministries of the order. She does not expect the congregation to ever get out of the farm business.

That sits well with Frank Romeo, 76, who retired in 2007 after more than 51 years as manager of Villa Maria Farm. He still has an office on site and visits his former co-workers regularly to answer questions and offer tips on managing the land he loves so much.

“I always felt the Villa was the epitome of beauty and sacredness,” he said.

Romeo also leads retreats as part of the sisters’ ecology-based spirituality ministry. His presentations focus on the connection between care for the earth and care for the human soul. He believes the farm’s rich soil is an “inheritance from our creator.”

“We know about the humus that helps to grow the plant that produces the food that helps our body and we can imagine the spiritual humus that feeds our souls,” he said.