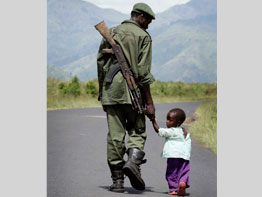 OTTAWA – A delegation of Congolese Catholic leaders appealed to Canada to help stop the war in their central African country.

“The situation is dire,” Bishop Fridolin Ambongo Besungu of Bokungu, Congo, told a luncheon information session on Parliament Hill. Members of Parliament from all parties attended the luncheon, organized by delegations from the Canadian Conference of Catholic Bishops and from Development and Peace, the bishops’ international aid and development agency.

Since the 1990s, warring militias have killed nearly 6 million people and displaced more than 2 million, devastating the civilian population through a campaign of organized rape. The United Nations estimates more than 250,000 people were displaced from July through November.

“We are suffering and need your support,” Bishop Ambongo said.

She called the militias’ systematic rape of women and children a form of genocide, since the rapists often have HIV or AIDS. She said attacking a woman was an attack on her husband, her family and society as a whole.

“We believe it is an extermination strategy,” she said.

She said she visited a displaced persons camp during the rainy season and saw women giving birth and children unable to find shelter.

Bishop Fulgence Muteba Mugalu of Kilwa asked for Canada’s help in the creation of a U.N.-approved international peacekeeping force to help end the violence. He said Belgium and the Netherlands were among countries prepared to participate.

Bishop Muteba said conflict was occurring around the illegal exploitation of natural resources such as tin and coltan, or columbite-tantalite, used in electronic devices. The mineral wealth obtained by small miners is being smuggled through Rwanda and finds its way into laptops and cell phones, he said.

The bishop called for a pact so that companies wishing to develop Congo’s wealth could do so peacefully in a way that is fair to the Congolese.

The delegation also asked for humanitarian support and an end to the impunity for war criminals from the Rwandan genocide as they control militias devastating Congo.

Archbishop Roger Ebacher of Gatineau, Quebec, who traveled to Congo with Development and Peace, recalled how hopeful the African nation seemed a few years ago as it prepared for its first democratic elections.

“I’m convinced Canada has a responsibility,” he said. “Canadian companies are present in the Congo. We have a social responsibility in that respect.”

He added that today “it’s a lot more dangerous to be a woman than a soldier.”