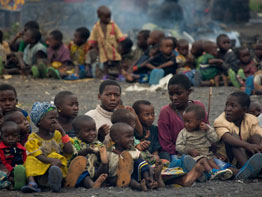 In an effort to quell violence and bring humanitarian aid to thousands of displaced people, two Congolese bishops called on the United Nations, the United States and other Western powers to strengthen international peacekeeping forces in their war-ravaged country.

Speaking in a Dec. 5 conference at the Baltimore headquarters of Catholic Relief Services, Bishop Fridolin Ambongo of Bokungu-Ikela and Bishop Fulgence Muteba of Kilwa-Kasenga, said assistance is desperately needed to stop a resurgence of fighting.

“We are not asking for American boots on the ground,” said Bishop Muteba. “We are asking for support in applying and implementing already-signed peace accords.”

There are already 17,000 U.N. peacekeepers in the Democratic Republic of Congo, but they have been ineffective in protecting civilians.

Sister Marie-Bernard Alima, executive secretary of the Congolese bishops’ justice and peace commission, said she has seen the effects of warring factions firsthand. In more than a decade, she said, nearly 6 million people have been killed and more than 2 million displaced in Congo.

“It’s a number equaled only by World War II, but it is a forgotten tragedy,” said Sister Marie-Bernard, a member of the Sisters of St. Joseph, Helpers of the Church.

Civilians are devastated by a program of systematic terror and rape, she said. Large populations of people are forced to flee, and the United Nations estimated that more than 250,000 people have fled their homes since August. There are more than 1.3 million who were already displaced in the region.

“I have witnessed women giving birth in open rain in camps,” she said.

Bishop Muteba said the illegal exploitation of tin and coltan, a metallic ore, is a major reason for the conflict. He asked U.S. officials to support dialogue in his homeland and to increase the volume of humanitarian aid.

“We need a peaceful approach to the exploration of mineral in the country,” he said.

Bishop Ambongo noted that those who have a rightful claim to mineral wealth have been beaten down by the violence.

“Now they say, ‘Let them take our mineral wealth and just leave us in peace,’ ” he said.

The three church leaders were to visit Washington, D.C., and New York to lobby U.S. and U.N. officials this week. They also visited Canada and France.

Working with local Caritas charities in eastern Congo, CRS has provided humanitarian support during the crisis.