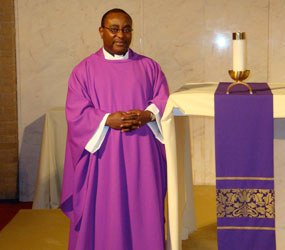 Forced in 1996 to flee the war-ravaged Congo (now the Democratic Republic of the Congo), 21-year-old Guy Kagere found refuge in neighboring Zambia, where he ended up living with American and European missionaries.

Today he is Father Kagere, ordained in 2003, and now a priest in the Archdiocese of Baltimore and Catholic chaplain at Good Samaritan Hospital.

While he attributes his priestly vocation to his devout Catholic family and the missionaries, he said he has “found” his ministry vocation at the Baltimore Catholic hospital, where his broad smile and caring presence has gained him the affection of staff and patients alike.

When he is not providing spiritual nourishment to Good Samaritan patients, he assists Monsignor William F. Burke, pastor of Baltimore’s St. Francis of Assisi, by celebrating Mass every day before he goes to work at the hospital.

“It’s been a wonderful experience,” said Father Kagere, who was assigned to Good Samaritan last January after serving for a short while on the pastoral team at The Johns Hopkins Hospital.

“When I came to Good Samaritan Hospital, I knew there was something special here,” Father Kagere said. “I felt goodness; a great sense of courtesy. And, I appreciate the multicultural environment here, as it has helped me feel more comfortable and at home in my new position.”

“Good ministry can make a big difference in a patient’s experience,” he said. “When a person is in the hospital, they’re in their most vulnerable state. As ministers, we’re able to offer comfort and compassion, even if it means just sitting quietly with them.”

Father Kagere was quick to discern how well the hospital lives out its mission. So much so that he felt compelled to report his observations to the Good Samaritan Hospital foundation’s board of directors.

“The compassion of the Samaritan flows into every aspect of our care, from the volunteers, those who administer the hospital and the community of office workers,” he told the board.

“They all form the outlook of compassion found here. Those privileged to help patients directly offer the same compassion through word and touch and insight. The doctors, surgeons, specialists, nurses and social workers each live out this compassion through contacts with patients and families. They go the extra mile to gently explain a situation, a course of treatment, and the possible outcomes.

“They keep the patient and family informed at every step,” he continued, “while giving time to absorb the reality of the situation unfolding before them. Most patients I visit share their great experiences with the staff in this hospital. They show delight and satisfaction with the care.”

Although happy in his new life in Baltimore, Father Kagere misses his family and homeland, where the Catholic Church is the strongest and most influential institution in the country, running most of the schools and hospitals, and providing most of the social services.

“The archbishop is more important than the governor,” he said with a grin.

He explained that Belgium, the country that colonized the Congo, firmly ensconced Catholicism there, leaving a legacy of faith that continues today.

“Vocations there are massive,” he said.

While his life with the missionaries in Zambia helped lead him to the priesthood it also gave the French-speaking young man the opportunity to learn English, which he now speaks fluently.

He said he is gratified and humbled by the reception he receives from patients at Good Samaritan.

“I find myself really needed, and on a more personal level I find that a bond is established between me and the patient.”

Ministering to the sick has helped his own understanding of life, he said.

“You realize how life can change suddenly when you are with someone who is ill or injured,” he said, “and you better understand how important it is to be a good person and to strengthen your relationship with God.”