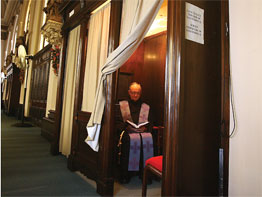 Waverly resident Diane Davis has a confession to make. She hasn’t been in nearly 30 years.

The 41-year-old parishioner of St. Ann, Baltimore, last received the sacrament of penance shortly before her confirmation.

“I find the whole process of confession to be very uncomfortable, or at least that is my memory of it,” she said. “I feel like I speak to God in my own way and if I’ve done something I think is wrong, I confess it to him directly.”

Ms. Davis isn’t alone among Catholics who shy away from the sacrament.
Pastors throughout the Archdiocese of Baltimore report low turn-outs during their regularly scheduled confession time.

“On a regular basis I have confessions scheduled every Saturday from 4 to 4:30 p.m., and I think since June of 2007 up until (October) I may have had five people come to confession during that time,” said Father Joseph L. Muth Jr., pastor of St. Matthew, Northwood.

Though the number of Catholics who seek priestly absolution at confession increases during the seasons of Advent and Lent, many clerics believe the sacrament is misunderstood and underused by their flock.

“A lot of people are afraid of confession,” said Father Adam J. Parker, vice chancellor of the Archdiocese of Baltimore. “And so are some priests.”
Confessing their deepest sins to a priest they know, sharing their secrets with clergy they don’t know, conflict between their definition of sin and the Catholic Church’s designation, and unfamiliarity with the process are just a few of the reasons why parishioners stay out of the confessionals, Father Parker said.

Catholics believe the sacrament of reconciliation was instituted by Christ when he gave the apostles the power to forgive sins. That power has been transferred through apostolic succession of priests during the past two millenniums.

While many priests continue to hear confessions in traditional confessionals with screens, many offer the sacrament in reconciliation rooms where penitents may confess their sins face to face.

“I think too few people take advantage of this beautiful sacrament,” said Monsignor Damien Nalepa, pastor of St. Gregory the Great, Baltimore. “It’s cleansing to the soul. It’s uplifting for the spirit. If more people went to confession, they would understand how lifting the burden of sin improves their lives and their faith.”

However, for Catholics like Nancy Fitzgerald of Millersville, the sacrament of penance is equated with feelings of guilt, and she is conflicted about her ability to shed that sensation in the confessional.

“I have struggled with this guilt thing for years, and have narrowed it down to my Catholic upbringing,” said Ms. Fitzgerald, a married mother of three sons. “I was basically taught from a very young age to feel guilty about anything and everything.”

It’s an emotion she doesn’t want to perpetuate for herself, her husband or her children and has discussed the topic with a priest friend on many occasions. She has also considered going to confession for more clarity.

“I don’t think we as priests talk about confession enough,” said Archbishop O’Brien, who goes to confession at least once a month. “Many people hold on to some of the old myths about confession, or they are afraid they will embarrass themselves because they haven’t been in a long time and have forgotten how to do it. As priests, if we talk about this more often, we can let people know we are here to help them, instruct them and make it easier for them.”

Father Parker recommends apprehensive Catholics discuss their trepidations with a priest, who can instruct them in the confessional process and guide them to the proper venue and confessor.

Clerics differ on their opinion of sin confession. While some believe it’s up to the individual to decide what is sin and what should be confessed, others deem the church’s definition of sin absolute and violators of those sins should confess to them, whether or not they agree it’s an offense.
Some priests have found that reconciliation services offer an alternative for people who are hesitant about going to confession, and such services draw more than 100 parishioners at St. Matthew.

While some people prefer to confess their sins to a priest they know and trust, others venture to unfamiliar parishes for a more anonymous reconciliation, said Monsignor Robert A. Armstrong, rector of the Cathedral of Mary Our Queen, Homeland, a church that experiences heavy traffic during scheduled confession times year round.

“The ironic thing is, people are afraid of what they are telling us, but there really isn’t a blessed thing that would shock me,” Monsignor Armstrong said. “I’ve heard so many confessions over the years. Nothing surprises me anymore. I’ve heard it all.”

Bad experiences in the confessional make it difficult to convince people the sacrament is beneficial, said Father Ross M. Syracuse, O.F.M. Conv., pastor of St. Casimir, Canton.
In encouraging Catholics to regularly make confessions – which are recommended at least once a year, shortly after committing serious sin and best every four to six weeks – Father Syracuse shares the positive impact reconciliation has had on him personally.

“One of the neatest things is when I tell people after they have made a difficult and heartfelt confession, ‘I’m very sorry to tell you that (a long pause) you have a very severe case of being normal,’” he said. “Ninety-nine-point-nine percent of the time it brings a smile.”