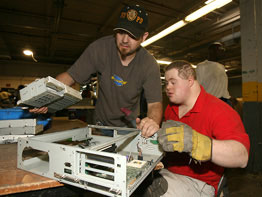 If unwanted computers, tossed televisions and mediocre microwaves fill a 104,000 foot warehouse, can you imagine what they’d do to a landfill?

But those electronics, awaiting a new fate in the warehouse at cdm eCycling in southwest Baltimore, will stay out of landfills. The computers will end up refurbished on desks in Nigeria, Ghana and Lebanon. The televisions will be repaired and sent to South America.
Those electronics beyond repair will be dismantled by hand for recycling: Motherboards contain valuable metals such as gold and silver; hard drives are made of aluminum, and rising oil prices mean a greater demand for recycled plastic.

Not only do the materials get a second chance, but people do, too.

Michael Fannon, a parishioner at Immaculate Conception, Towson, owner of cdm eCycling, said about six years ago the company partnered with the Columbia-based nonprofit Emerge Inc. to provide employment opportunities for the developmentally disabled.

“It’s been a great relationship with them,” he said. Depending on their skill level, the workers from Emerge dismantle computers and test monitors.

The company also employs those just released from prison.

“We give them that opportunity to come in and work in a warehouse,” said Mr. Fannon. Once they gain skills, such as driving a forklift, they move on to other jobs. Sometimes, he said, it’s apparent within the first week the person is going to end up back in prison – but others work out. “We have three or four we’ve hired on full time,” he says. “That way I feel I’m living my faith in that I’m giving people a second chance.”

Last year, the company, which has 50 full-time employees and uses 30 to 40 disabled workers, recycled 8.5 million pounds of materials reclaimed from anything with a cord or a battery.

The for-profit company has contracts with municipalities and government agencies to collect and recycle electronics. Upon arrival, hard drives are wiped clean for security and licensing issues. Sometimes, computers come brand-new, still in the boxes.

Once, Mr. Fannon recalls, a law firm offered him 1,000 never-used plastic binders; he accepted and donated them to a school system in Virginia.

Mr. Fannon said he started the business with a partner who had a paper recycling background after seeing the need. “I came from the waste industry; my dad was a trashman,” he said.

Initially, a friend offered the pair space in his warehouse.

“I think he had $500 and I had a credit card; we did everything, and it just grew from there,” Mr. Fannon recalled.