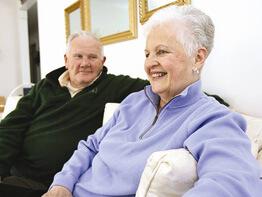 After six years of retirement in Florida, Dave and Phyllis Gemmell returned to Catonsville in 2002 to be closer to their children and grandchildren, and wound up as devoted volunteers for their adopted parish, St. Benedict in Baltimore.

The couple says the community spirit in their parish is so strong, it inspires them to help out in any way they can.

Now in their mid 70s, the Gemmells – who recently celebrated their 56th wedding anniversary – don’t consider themselves diehard servants of their church, but St. Benedict office manager Diane Hoffman says the Gemmells are a great example of how collectively the people in the parish each can do a little to make the community a better place.

“You have some people who dedicate so much time to the church, but I wouldn’t say that is the majority of the people in the congregation,” Ms. Hoffman said. “When you have a lot of people sacrificing a little bit of their free time each week for the good work of the church, the wealth is spread so much more evenly and our ministry flourishes.”

Every Wednesday, Ms. Gemmell drives to Primrose Place near St. Agnes Hospital, Baltimore, to give Communion to fellow parishioner Sarah Bruce, 80, who is unable to make it to church most weeks.

Mr. Gemmell serves as an extraordinary minister of holy Communion during the weekly 5 p.m. Saturday Mass.

Both have helped out with various parish community outreach projects, including serving Thanksgiving dinner, packaging food for the poor and helping out with the parish gift shop.

“Father Paschal (A. Morlino, O.S.B., pastor of St. Benedict’s) has a way of inspiring people to become involved in the good works of the church,” Mr. Gemmell said. “So, I’m not sure we can take the credit there.”

The couple’s humble nature was trumpeted by Ms. Hoffman, who added the Gemmells are generous with their time, but don’t consider their service a sacrifice. “They are just kindhearted people who believe that helping others is just what you are supposed to do.”
Though they have only been parishioners of St. Benedict a few years, their connection to the church is long and strong.

Ms. Gemmell grew up in a house two blocks from the parish, attended the now-closed St. Benedict School when the monthly tuition was only 65 cents and was a parishioner in the 1930s when there was still a small pew fee.

Baptized a Methodist, Mr. Gemmell converted to Catholicism about 30 years ago, and their family attended St. Agnes, Catonsville, until the couple retired and moved to Florida in 1996.

Upon their return, they attended a Mass at St. Benedict and Mr. Gemmell was so inspired by Father Morlino’s homily and the spirit of community at the parish, he declared he would continue to worship at the West Baltimore church. His wife approved and the duo became enthusiastic parishioners.

“When Father Paschal asked Dave to be a eucharistic minister, I didn’t think he’d go for it, especially since he is a convert,” Ms. Gemmell said. “But, he didn’t even hesitate. I think this is all a testament to the sense of community at our church.”