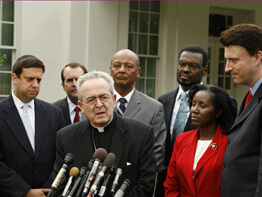 PHILADELPHIA – The priorities of the U.S. bishops’ Committee for Pro-Life Activities today are “the priorities we’ve had for years, along with new challenges to life, “ said Cardinal Justin Rigali of Philadelphia, who is now chairman of the committee.

“We are simply trying to be faithful defenders of life at this juncture in the history of the U.S. and the world,” said the cardinal.

Cardinal Rigali was chosen chairman-elect of the pro-life committee during the bishops’ November 2005 general meeting, and took over as chairman at the end of the bishops’ fall meeting in 2006, succeeding Cardinal William H. Keeler of Baltimore.

“Whatever wounds, weakens or destroys life anywhere is something that is to be banned from the world,” the cardinal told The Catholic Standard & Times, his archdiocesan newspaper. “But we must start by showing respect to each and every human being, recognizing the right to life of each human being from conception to natural death.”

Cardinal Rigali was in Washington for the annual March for Life events Jan. 21-22, which this year marked the 34th anniversary of the U.S. Supreme Court’s Roe v. Wade decision legalizing abortion.

He noted that between 45 million to 50 million abortions have occurred in the U.S. since 1973.

He was among 20 bishops at the March for Life rally Jan. 22. Earlier that morning he celebrated Mass for a crowd of youths at DAR Constitution Hall. On the eve of the march, he was principal celebrant and homilist at a Mass at the Basilica of the National Shrine of the Immaculate Conception in Washington.

In Philadelphia, he said, the high murder rate that has occurred there since the turn of the new year is an example of how lack of respect for human life plays out in the world.

The cardinal echoed the sentiments Pope Benedict XVI expressed during a Jan. 9 address to the ambassadors and diplomats who serve at the Vatican.

“The Holy Father said that the Holy See will never tire of reiterating that armed solutions achieve nothing,” Cardinal Rigali said. “Violence is not an adequate solution to dealing with human beings. We need to find new solutions to our problems, solutions that take into account true respect for every human life.”

He said the pope also spoke “about the mounting threats to the natural composition of the family based on the marriage of a man and a woman, and the attempts to relativize it by giving it the same status as other radically different forms of union,” the cardinal said. “All this affects the family, and therefore, the source of life.”

Within the family itself, life is being attacked by practices such as the widespread use of contraceptives. In response, he said, the bishops approved a pastoral letter on “Married Love and the Gift of Life” last November.

It strongly supports natural family planning, which “enables couples to cooperate with the body as God designed it.” It adds that contraception introduces “a false note” that disturbs marital intimacy and contributes to a decline in society’s respect for marriage and for life.

Some forms of artificial contraception are abortifacients, Cardinal Rigali noted.

In the face of the culture of death, the church continues to proclaim the message of Christ “with great conviction” and the message that “if human life is violated with impunity, then we are a society in chaos.”

But Christ’s message must always be transmitted in the proper context, which is in the form of an invitation, Cardinal Rigali said.

“Christianity is not a police force. There is no way in the world you can force people, because these are not God’s instructions (to force people),” he said. “To challenge them, yes, to force them only by the compelling power of truth itself – not physical force.”

All of those engaged in the fight for life can never stop extending the invitation of Christ, even to those who repeatedly reject it, he said.