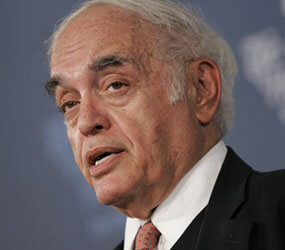 WASHINGTON – Robert Novak, a longtime syndicated columnist and political commentator who joined the Catholic Church in 1998, died at his home in Washington early Aug. 18 after battling brain cancer for more than a year.

A funeral Mass was to be celebrated for him Aug. 21 at St. Patrick Church in Washington, followed by a private interment.

Novak, 78, gave up his newspaper column once he received his cancer diagnosis.

The tumor was discovered some days after Novak hit a homeless man while driving in downtown Washington. After the accident, according to an Associated Press story, he was hospitalized when he collapsed during a visit to Massachusetts, and doctors there found the tumor.

Novak was editor of the syndicated Evans-Novak Political Report, which had its home at the Chicago Sun-Times. The column continued for 30 years until the death of Rowland Evans Jr. in 2001. Novak then wrote the column on his own until discontinuing it last year.

He also served as co-host from 1980 to 2005 of several of the CNN cable channel’s political talk shows, including “Crossfire.” In August 2005, Novak was having a debate with James Carville, a Democratic political consultant, when he swore on the air and stormed off the set. CNN never let him back on the broadcast, even though he apologized. Afterward, Novak turned to cable’s Fox News Channel to make occasional appearances.

Born to Jewish parents, Novak converted to Catholicism at age 67 after attending Catholic services for several years. His wife of 47 years, Geraldine, also joined the church at that time.

In a 2007 talk to promote his book, “The Prince of Darkness: 50 Years Reporting in Washington,” Novak said a one-time source turned priest helped lead him toward becoming a Catholic, although he gave a major share of credit to the Holy Spirit.

The priest was Father (now Monsignor) Peter Vaghi, then pastor of St. Patrick Parish in Washington, who once worked as an aide to former Sen. Pete Domenici, R-N.M. Geraldine Novak persuaded her husband to accompany her to Mass there, and he did so for four years.

But prior to a lecture at Syracuse University, Novak was seated at a dinner table near a young woman who was wearing a necklace with a cross. Novak asked her if she was Catholic, and she posed the same question to him. Novak replied that he had been going to Mass each Sunday for the last four years, but that he had not converted. Her response – “Mr. Novak, life is short, but eternity is forever” – motivated him to start the process of becoming a Catholic through the Rite of Christian Initiation of Adults.

“As the millions who read his column over the years know, he was not ‘just’ an opinion columnist; he was a great reporter who regularly scooped his colleagues through hard work and a lifetime of contacts from one end of the political spectrum to the other,” said American Conservative Union chairman David Keene in an Aug. 18 statement.

“He was a Washington institution who could turn an idea into the most discussed story around kitchen tables, congressional offices, the White House, and everywhere in between,” said a statement by Sen. Mitch McConnell, R-Ky.

Novak “will be remembered for his generous heart and his tireless pursuit of truth, which ultimately led him to the Catholic faith,” said William Fahey, president of Thomas More College of Liberal Arts in Merrimack, N.H.

Novak was a benefactor of the Catholic college, which provides a rigorous education to minority students who have graduated from inner-city schools. It has a scholarship fund named for him.

Raised in Joliet, Ill, Novak worked as a sports stringer for the Joliet Herald-News newspaper while he was still in high school. While he attended the University of Illinois, he worked at the Champaign-Urbana Courier newspaper.

After college, he was a lieutenant in the U.S. Army, serving in the States during the Korean War from 1952 to 1954. He worked for The Associated Press in Omaha, Neb., and in Indianapolis. He was transferred to the AP’s Washington bureau.

Novak became the chief congressional correspondent at The Wall Street Journal, working at the paper from 1958 until 1963, when he and Evans started their column.

He is survived by his wife, Geraldine, and the couple’s daughter, Zelda, and son Alex.