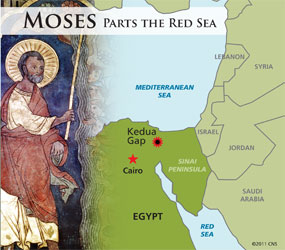 BOULDER, Colo. – From his office in Boulder, scientist Carl Drews can pinpoint the spot where his research theorizes the biblical miracle of the parting of the Red Sea took place.

Although Drews has never been there, the Google Earth Pro imaging on his computer can zoom in on the place in Egypt where Moses and the Israelites escaped death when the waters parted, according to the Book of Exodus. His virtual “pushpin” comes back with images of what is now predominately agricultural land, with orchards, irrigation canals and grape fields indicating vineyards.

It is in the Eastern Nile Delta, between Pelusium and Qantara, and 75 miles north of the most popular theorized place in Egypt, which has been the Suez Canal. And it’s reachable on foot.

“One of the places right in the middle of the crossing shows what looks like a hotel and some type of building,” said Drews, a member of Epiphany Anglican Fellowship in Boulder, a congregation under the umbrella of the Anglican Mission of the Americas out of Rwanda. “It would be fun to knock on their door and to say in Arabic, ‘Do you know that Moses walked right by here.’ It would probably elicit a form of disbelief. But perhaps people would say, ‘Well, maybe …’“

His research made the miracle ever more real, said Drews, who claimed to have always been enchanted by the account in the Book of Exodus.

“For anyone who always believed this happened, somehow it’s still a thrill to see it supported by scientific finding,” he said.

Drews, of Gunbarrel, took up the crossing of the Red Sea for his master’s thesis in oceanic and atmospheric sciences at the University of Colorado at Boulder.

His research gained national attention, including a segment by ABC News anchor Diane Sawyer, but the software engineer with the National Center for Atmospheric Research said he was not comfortable with the premise some media took – that his research “explained” the phenomena of the parting of the Red Sea.

“The science can only look at the physical aspects of it,” Drews told the Denver Catholic Register, newspaper of the Denver Archdiocese. “‘Explanation’ means somehow God didn’t do it and I don’t like those connotations. I think my research further affirms it happened. I think it supports the account.”

The study was part of a project into the impact of winds on water depths, including the extent to which Pacific Ocean typhoons can drive storm surges, according to the University Corporation for Atmospheric Research, known as UCAR.

“By pinpointing a possible site south of the Mediterranean Sea for the crossing, the study also could be of benefit to experts seeking to research whether such an event ever took place,” UCAR said in a statement. “Archaeologists and Egyptologists have found little direct evidence to substantiate many of the events described in Exodus.”

Drews and oceanographer Weiqing Han analyzed archaeological records, satellite measurements and current-day maps to estimate the water-flow and depth that could have existed 3,000 years ago. They then used an ocean computer model to simulate the impact of an overnight wind at that site.

The results were that a wind of 63 mph, lasting for 12 hours, would have pushed back waters estimated to be 6 feet deep. That would have exposed mud flats for four hours, creating a dry passage about 2 to 2.5 miles long and 3 miles wide. As soon as the wind stopped, the waters would come rushing back, UCAR said.

“There are a number of details (in Exodus) like the duration of the wind and the direction of the wind that support the computer model,” Drews said. “The fact that bodies washed up on the Eastern shore where the Israelites were able to see them – details like that were confirmed by the ocean model.”

From a theological standpoint, the timing of the Red Sea parting when Moses and his people needed to cross shows the miracle, Drews said.

“From a faith perspective, it has always made sense to me that God uses natural action to carry out his plan if he so chooses,” said Drews, who grew up Lutheran. “In this case, he sent the wind and the wind moved the water. God is using natural means to bring out what he wants to have happen, which is to save his people. In this case, God is directing all things.”