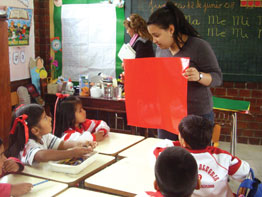 During the 2007-08 school year, College of Notre Dame of Maryland students Michelle Santos and Angelica Bustamante simply signed up for the school’s new Service Abroad program.

When they returned from volunteerism in Lima, Peru, earlier this month, they were armed with the education of a lifetime.

The students lived in a convent with School Sisters of Notre Dame from June 4 to July 4, seeing firsthand how, on a daily basis, the nuns address the needs of the country’s forgotten elderly and its youngest citizens.

Ms. Santos, a Crofton native, and Ms. Bustamante, from Miami, were integrated into those routines and saw startling aspects of humanity, both good and bad.

“It was one of the best experiences of my life,” Ms. Santos, a rising junior at Notre Dame, said. “The people took me in and shared their life stories. The fact that they were willing to share definitely made me feel good that they trusted me.”

The program’s foundations were forged three years ago, when some of the school’s students were looking to volunteer in other nations. It was not until this past year, however, that it officially launched and included credit hours.

Sister Kathleen Marie Engers, S.S.N.D., one of the founders of the program and a professor of communications at the College of Notre Dame, said she hoped Ms. Santos and Ms. Bustamante could be a catalyst for others serving globally.

“It’s an opportunity to give back. Our congregation has always had that as part of their mission,” Sister Kathleen Marie said. “In educating women we hope to transform the world.”

To prepare for the trip, the pair engaged in a credit-hour independent study with a campus history professor to learn more about the Peruvian culture.

The trip was emotional, as they worked to instill a small amount of change in a country desperately in need of it.

Younger Peruvians often swindle the elderly, including family, out of money and land, leaving them abandoned, homeless and without food.

The Notre Dame students volunteered during the mornings during the week at Los Martincitos, a haven where those older victims could be fed and nurtured. They played games with them and engaged them in conversations. In return, the people of Los Martincitos shared their personal stories of pain.

“I had to remind myself that I really had to be strong,” Ms. Bustamante, a rising senior from Miami, Fla. said of her experiences with the abandoned elderly. “I cried almost every day.”

Ms. Santos and Ms. Bustamante both spoke fluent Spanish, which made their communication with the Peruvians easier. They were never regarded as outsiders, despite their American backgrounds. Each was greeted with abundant smiles from grateful locals.

“I think what struck me was that we have to have more respect for the elderly,” Ms. Santos said. “They need just as much respect as middle-aged people or young people. We need to be more involved with the elderly.”

No matter where they volunteered during the day, they saw the active work of the School Sisters of Notre Dame, the founders of the College of Notre Dame of Maryland.

“I met a lot of courageous sisters and they taught me a lot of things about serving,” Ms. Bustamante said. “I wanted to grow spiritually and I did.”