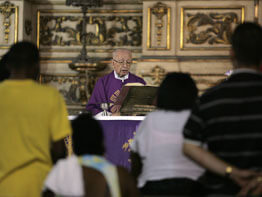 WASHINGTON – After nearly 50 years when religious practice was discouraged by the communist government, Catholic bishops in Cuba these days are looking for support from U.S. Catholics to “try to bring back peoples’ religious memory,” as one bishop put it.

In one diocese, that means enlisting grandparents who grew up at a time when they were taught about the church to help educate their grandchildren about the faith. In another, it means paying for Cuban families to attend the World Meeting of Families in Mexico. Other dioceses are working to expand their use of contemporary media including the Internet, access to which is still tightly controlled by the government.

Cuban projects get the largest single-country share of funds from U.S. parishes raised in the annual collection for the church in Latin America, held in most dioceses Jan. 24-25. The collection also supports work done in Latin America by the Department of Justice, Peace and Human Development of the U.S. Conference of Catholic Bishops.

Archbishop Juan de la Caridad Garcia Rodriguez told U.S. visitors in September that in his Archdiocese of Camaguey grandparents teaching the youngest generation has been an effective system of catechesis “because they remember. Then the children help teach their parents,” whose generation missed out on religious education during the government’s most restrictive period.

He said efforts as simple as showing religious-themed films and television programs are useful catechesis tools.

Bishop Mario Mestril Vega of Ciego de Avila said in September that he was looking for funding for three projects in his small diocese of four parishes. The committee that approves how the collection is spent authorized a grant of $1,600 for formation for people whose homes are used as religious meeting places.

The Cuban government generally doesn’t allow construction of new church buildings. Instead, hundreds of Catholic communities nationwide meet in people’s homes, especially in areas where the nearest churches are difficult to reach.

Funds from the collection are generally used only for programs and activities, not for physical buildings. An exception was made this year to give $250,000 toward the reconstruction of churches and church buildings that were destroyed by Hurricane Gustav and Hurricane Ike in 2008.