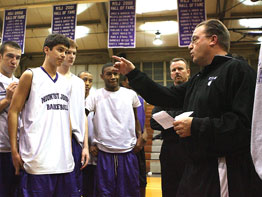 There’s not a lot of frill or fluff that comes along with Pat Clatchey, Mount St. Joseph High School’s longtime head basketball coach.

Clatchey, a 1980 graduate of the Irvington high school, keeps it real. He is in his 20th year as a physical educator at Our Lady of Victory School, Arbutus, and has built his success on the foundation that giving your best, both in the classroom and on the court, will make all the difference at the end of the day. Clatchey has framed one of the toughest and most highly regarded basketball programs in the country.

With eight former Gaels currently playing at the Division I level and a total of 21 DI players since Coach Clatchey took the reins 16 seasons ago, the Gaels are pushing forward in 2007-2008 to make their mark again on the MIAA A Conference and the Baltimore Catholic League.

CR: How did you get involved in coaching?

PC: I started coaching St. Joe’s freshmen team in the mid-80s. We went 72-19, but then I had the chance to coach at the Division I level at UMBC for three years. I was also a pro-scout for a year. At the age of 29, I got the job here at St. Joe and am now entering my 16th season.

CR: What do you love most about coaching?

PC: I have always loved the game and just being around the game. I like working with young people. I like to help them achieve their goals, both as students and as players. It’s so rewarding to see so many of our players go on to play at the next level and get scholarships.

CR: What are your greatest challenges as a coach?

PC: You get what you tolerate. If you tolerate a lack of effort or you tolerate mediocrity, then that becomes a habit. I tell the players that “I expect your best because that’s what I’m giving you every day.”

Sometimes you have to have tough love and send a message. In the long run, they have to understand that I’m for them, not against them. Over the last six years our record is 178-34, but you know, we aren’t going to win a championship every year. The challenge of a coach is to make your team the best they can be, each and every year. I enjoy seeing the players improve and the team improve, and I enjoy the journey.

CR: Talk about your team this year.

PC: Coming off of last season, we were extremely young. We only had one player, Dino Gregory, who had ever started in a varsity game last year yet we went 25-8, and I think we had a very good season. Our guys got better, and they found out what it took to be successful at that level; now we are reaping the rewards. We have 10 returning players, and last year the JV was 27-1; so I would say that we have a pretty good team. I’m not going to sit here and say that this is a championship team, that’s why they play the game and keep score, but we have really good kids on the team. In fact, we had eight of 13 of our players make the honor roll this semester and three missed it by one grade. We want to be strong in the classroom and on the court.