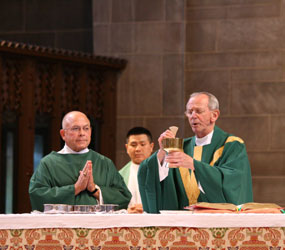 When Deacon Ray Moreau leaves the Cathedral of Mary Our Queen Sept. 1 to begin a new chapter in his life and ministry, it will be, he said, “a bittersweet” time, a sentiment echoed by the cathedral’s rector, staff and parishioners.

“It’s been such a wonderful and fulfilling experience but I think God has new plans for me,” said the 63-year-old retired U.S. Air Force officer and former business executive who served for seven years as the cathedral’s chief administrative officer while continuing his diaconate pastoral ministry.

The Catonsville native, who has three daughters and seven grandchildren, is moving to Savannah, Ga., where he hopes a warmer climate will improve his wife Judy’s health. There he will be assigned to a new parish to continue his ministry and to become, as he put it, “the best deacon I can be.”

“During his time with us, Ray has been an enormously energetic and dedicated advocate and servant of our cathedral parish community, the Archdiocese of Baltimore and the larger civic community,” said CMOQ’s rector, Father J. Bruce Jarboe. “As a wise and prudent steward, Ray has provided oversight and care for the continuous strengthening of our financial resources, our facilities and physical plant, our technology system and our human resource and staffing needs.”

Calling his accomplishments at the cathedral “truly significant,” Monsignor Jarboe noted that Deacon Moreau oversaw many successful and special projects, such as the complex arch and roof repairs to the church; improved sidewalks, renovation of the organ, coordination of the parish capital campaign, the installation of a new sound system, a new turf athletic field for the parish school, and many other innovations and renovations.

He was also responsible in large part for the reorganization and development of the cathedral’s pastoral council and its core ministry committees, “to name just some of the highlights,” Monsignor Jarboe said.

Ordained in 2003, Deacon Moreau brought the considerable skills he had acquired from the military and from the prestigious wealth management firm, Merrill Lynch, to the cathedral after serving briefly at Holy Family in Davidsonville.

“I wanted to work for the church for a long time and my ministry at the cathedral gave me the opportunity to apply and give my skills to the church,” he said.

However, observed Monsignor Jarboe, “as much as Ray has contributed to the ‘temporal realities’ of our parish, he has always done so not simply as ‘a job,’ but as it really is – a ministry.”

Deacon Moreau said he had “felt a calling to serve God” ever since he was a student at Mount St. Joseph High School in Baltimore. He entered a diaconate program while in the Air Force but transfers made it impossible for him to complete his studies.

Finally, he entered the Baltimore archdiocese’s diaconate program in 1999 and later went on to earn a master’s degree in church ministry, with a major in spirituality, from St. Mary’s Seminary and University in Roland Park.

Looking back at his CMOQ time, Deacon Moreau said he is “amazed” at what the parish was able to accomplish.

“I’m a great believer that God has a plan,” he said. He noted, however, that the cathedral’s accomplishments were not his so much but are “really due to the many parishioners who freely gave of their valuable time and considerable professional resources in a wonderfully committed and dedicated way.”

He also credited the cathedral’s former, longtime rector, Monsignor Robert Armstrong whom, he said, “gave me so many opportunities and was so wonderful to work with.”

“Ray was a great friend, a wonderful deacon, and the skills he brought to the cathedral, especially in the area of maintenance, were incredibly helpful,” said Monsignor Armstrong, who worked with Deacon Moreau for six years. “He is just a very fine and dedicated Catholic and clergyman.”

Other than the business end of his parish ministry, Deacon Moreau said the cathedral’s “magnificent” liturgies gave him “a deeper appreciation for liturgy, particularly the Mass, which is what we do as a gathering people. Now I get so much more out of it and find myself spiritually strengthened.”

“We will truly miss Ray’s presence among us – and we thank God so sincerely and gratefully for Ray’s selfless and generous service to us all,” Monsignor Jarboe said.

“It’s truly bittersweet,” Deacon Moreau said, “but this will be a new chapter in our lives. God seems to be agreeing with this plan, and I will do my best to follow it.”