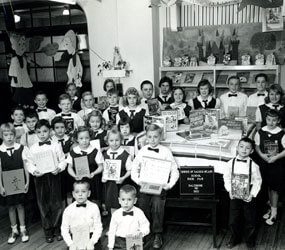 At the conclusion of the current school year, 13 Catholic schools in the Archdiocese of Baltimore will close.

The Catholic Review pays homage to those schools and their legacies, with capsules of the elementary schools. Six appear this week, and six more appeared in the May 27 issue. An article on The Cardinal Gibbons School will appear in the June 10 graduation issue.

Worth remembering: “This Little Light of Mine” was the offertory song May 26, when a final Mass for the elementary students was celebrated. The Negro spiritual was testament to a mission that began in 1890, when the Josephite Fathers of St. Peter Claver Parish opened a school for black children. During the Great Depression, enrollment peaked at more than 600 students, but numbers dropped and in 1973, the archdiocese formed Father Charles Hall School, with multiple parishes providing support and elementary students being housed at the old St. Peter Claver School and middle-schoolers being taught at what had been the St. Edward parish school. Traditions came to include fasting for 24 hours during Lent, with students donating their food money to assorted charities.

“Someone told me there was a quaint little school I had to see,” said second-grade teacher Terri Kent, completing her 11th year there. “I stayed because of the people, because I see that what I do in the classroom today affects the children tomorrow.”

Commemorative events: An event dedicated to celebrate the decades of the school was scheduled for May 26. Graduation was to be held May 28.

Worth remembering: The late Archbishop Francis P. Keough granted permission to then-pastor Father Francis J. Egan to build a school in 1949. A year later, a cornerstone was laid.

The school sits on the western part of Baltimore City and Baltimore County.

A little more than a decade into its existence, St. William of York rose from 203 to 720 students. The peak year came in 1961, with morning and afternoon sessions established in the first three grades. In recent years, the school served mostly minority students as demographics changed. The school faithfully educated in the Catholic tradition while honoring the faiths of its students.

Worth remembering: When Shrine of the Sacred Heart School opened in 1867, it was housed on the grounds of Mount St. Agnes College. Beginning in 1872, a two-room schoolhouse served children for 40 years. In 1917, the school moved to the church undercroft until a new school was built in 1959.

Martha Pierorazio, principal, said the charism of the Sisters of Mercy who established the school has been a vibrant presence throughout its long history. Shrine of the Sacred Heart School was one of the first Catholic schools in the archdiocese to be integrated. Today, the school has a large immigrant population with students representing 42 countries.

“For a fourth of our students, English is the second language at home,” said Pierorazio, noting that Filipinos represent the largest immigrant population at Sacred Heart. Children come from Buddhist, Jewish, Muslim and Christian families, she said, with 72 percent of the student population made up of Catholics.

“I think that we have kept the tradition of the Sisters of Mercy alive – their commitment to the poor and their sense of respect and responsibility,” Pierorazio said.

Commemorative events: The school was having a farewell liturgy June 2, with the eighth grade graduation June 4. The spring production had the title, “We are family walking together in faith.”

Worth remembering: When Mother Mary Lange School opened in 2005 at the former home of St. Anthony of Padua School, Oblate Sister of Providence Rite Michele Proctor took on the challenge of principal.

Blending communities from St. Anthony of Padua, Shrine of the Little Flower and St. Dominic, she saw the school grow as a family during its second year. In just five years, it left a mark in Baltimore.

“It was a short life, but a rich life,” Sister Rita Michele said.

Named after the foundress of the Oblate Sisters of Providence, the school strengthened the faith life of students, many of whom are not Catholic.

Mother Mary Lange School was one of two elementary schools to host PRIDE, the program for children with average to above average intelligence who also have various learning disabilities. The students who were in the program felt part of the overall school program.

A partnership with Good Samaritan Hospital proved rewarding. Students participated and won stock market, essay and champions of courage contests. The school’s basketball teams thrived and the first yearbook was published this year.

A majority of students also took part in the after-school youth place program, which provided more than 20 activities like crocheting, karate, dance, computers and art, as well as math and science tutoring.

Compliments have been frequent from visitors throughout the years. The principal said one of the most touching was from someone who said, “You could feel the spirit of God in this place.”

Sister Rita Michele said many people came together to make the school a reality.

“The finger of God was in this school,” Sister Rita Michele said. “I leave here convinced of that.”

Commemorative events: The school had its final “moving on” ceremony for its eighth graders May 26. Former students were invited back for the event.

Worth remembering: Monsignor Edward M. Miller, St. Bernardine’s pastor, was asked in 1997 to open a parish school on the site of the former Madonna School. The parish had previously operated a school which closed in 1973. Two years after the new school opened, current principal Dr. Antoinette Lyles arrived at the West Baltimore School.

Dr. Lyles, a parishioner of St. Bernardine, had recently retired when she took the position, but felt called to further the mission of Catholic urban education.

“It’s been a wonderful experience,” she said. “We’ve been a bright spot in the community and the school has support from our parish that’s just been unbelievable.”

Most of the students, Dr. Lyles said, are not catholic. Yet, the school was able to connect with the children so much that many moved on to Catholic high schools.

The school dedicated a library two years ago. A program for math, science and engineering saw students build bridges and Ferris wheels. Some took part in an economics achievement program and a University of Maryland reading study. Others participated in a parish-run speech club.

Students learned the faith and became caring contributors to society.

“I really feel this is important,” Dr. Lyles said of the school “This has really given them the opportunity to expand. Some of them are the first in their families to go to college. The most important part is that no matter what religion they are, they at least know we care about them. We’ve made an impression that’s important.”

Religious staff: Sisters of Providence of St. Mary’s of the Woods

Commemorative events: A closing liturgy commemorating 81 years of service by Ascension School will be held June 13 at 11:30 a.m. at the church. A reception will follow in Brewer Hall from 1 to 3 p.m. R.S.V.P. 410-242-2020 or Roxanne.bernhardt@archbalt.org. Graduation took place May 28.

Worth remembering: In September of 1929, a convent was completed at Ascension Church, and the Sisters of Providence began teaching eight grades. The sisters remained at the school until 1984. Classes were held on the third floor of a building which housed the church on the main floor and the social hall on the lower level. By 1958, it became evident that the people of Ascension had outgrown the church and school. The current school building was dedicated on the parish feast day, Ascension Thursday, May 11, 1961, by the Archbishop Francis P. Keough. The basement of the building was used as a temporary church until the Thanksgiving Day Mass was said in the current church on Nov. 28, 1985.

“I am in awe of the commitment to the school shown by the pastor, parents, students, faculty, alumni and parishioners,” said Virginia P. Bahr, principal. “For 81 years, Ascension School has been a model of the benefits that Catholic education provides to our students, families and community.”