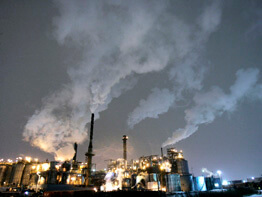 UNITED NATIONS – The poor are disproportionately affected by the environment and are particularly vulnerable to climate change, said Catholic representatives from around the world Sept. 6 at a U.N. conference on climate change.
Small groups can adopt good practices to mitigate the adverse impact of climate change and promote human rights, they said in describing current projects in Nigeria, Indonesia, Australia and Newark, N.J.
The midday workshop on “Human Rights and Good Practices in the Face of Climate Change” was part of a Sept. 5-7 conference at the United Nations.
Sister Cecilia Nya, provincial leader of the Sisters of the Holy Child Jesus in Africa, described an organic farm run by her congregation in southwestern Nigeria. “The organic farming movement is a response to the earth and its needs,” she said. “The farm lets us meet people at their areas of greatest need: food and how to produce it in a sustainable way.”
Five years ago, there were two baby chicks on the farm, called the Holy Child Integrated Agricultural Center. Today, five sisters and 24 laypeople care for 2,000 chickens, 180 pigs, numerous goats and turkeys, a pond filled with catfish, and 120 acres planted with fruit, vegetables and grain.
“Our mission is organic in the truest sense,” said Sister Cecilia. “It is vital, essential and interconnected as in a living organism. Every process is designed to be related to another one, so that the whole becomes greater than the sum of its parts.”
Sister Cecilia described how the waste remains of slaughtered chickens are fed to the fish and the water from the fish pond is used to irrigate the crops. “It is an eco-friendly process that reflects how all things in life are interdependent.”
The farm maintains close links with the local community, said Sister Cecilia. “We sell eggs, chicken and pork. We buy surplus cassava (a plant with edible, starchy roots) from the local farmers and make ‘gari’ (a traditional flour) from it. We mill animal feed and compound natural feeds for animals and we rent tractors.”
The agricultural center is also digging a bore hole to provide water for the farm and the village.
“Villagers can buy natural foods at affordable prices, find a job and grow in a sense of power and dignity,” Sister Cecilia said.
The lay workers at the farm are both Christian and Muslim, she added. “We have Catholics, non-Catholic Christians and Muslims,” Sister Cecilia said. “We pray together every morning before we get to work and each group takes a turn to lead the morning prayer.”
Sister Carol Johnston, a Sister of Charity who works with the Ironbound Community Corporation in an impoverished neighborhood of Newark, acknowledged that conditions in Ironbound are not nearly as basic as those in the developing world. But, she said, “the same worldview has shaped the realities of lives there.”
“Global warning is the result of a transnational economic system that uses resources to fuel an industrial economy,” Sister Carol said. Pollution of both the air and the water in Ironbound has contributed to the highest concentration of asthma cases in the state and is, she said, “the legacy of industrialization in a low-income community.”
There is hope, said Sister Carol, who serves as director of special projects for the corporation, a nonprofit group that works for social and economic justice. “We’ve moved from dissent to envisioning,” she said. “We’re seeing that climate change comes from within. Small-scale initiatives of people with reverence for the place they’re in can rebuild the community.”
Paulus Rahmat of Vivat International, a nonprofit organization founded by the Sisters Servants of the Holy Spirit and the Society of the Divine Word, described land terracing, reforestation and integrated farming as sustainable development initiatives in Flores, Indonesia, an island 3,000 miles east of Jakarta.
Mercy Sister Pat Linnane, a member of the Mercy International Association from New South Wales, Australia, addressed the plight of indigenous peoples and reminded the conferees that “change is local; transformation is global.”