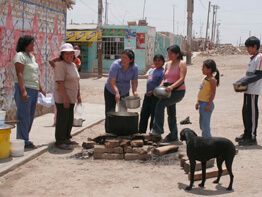 PISCO, Peru – Six weeks after an earthquake flattened 80 percent of the adobe brick homes in Pisco, the town on the Pacific coast 140 miles south of Lima, had only recently started to rumble consistently with the more welcome sound of heavy equipment hauling away tons of rubble.

The otherwise flat terrain around Pisco was growing new hills, composed of broken adobe bricks, scraps of roofing material, windows, furniture and other unsalvageable remains of what had been a city of 116,000 people before the magnitude 8 earthquake on Aug. 15.

Caritas Peru, the Catholic Church’s relief organization, reported a national death toll from the quake of 519 people, with another 1,800 injured. More than 70,000 homes were destroyed, and 33,000 more were damaged.

Pisco, Ica, Chincha, San Clemente, San Andres and other shattered towns shake with seismic aftershocks only rarely now. Instead, their narrow roads tremble with the vibrations of bulldozers and dump trucks hauling away debris.

But earthquake cleanup and repair are pretty much the only activity in town. Many of the farms and fishing boats that normally provide jobs in one of the poorest regions of Peru still sat idle in late September. Irrigation canals were damaged, making it impossible to water fields at a critical point in the growing season, while a small tsunami following the quake battered boats enough to make holes in their hulls.

The farmers and fishermen who eventually will repair them had first to focus on getting their damaged homes in order, explained Walter Blake of Catholic Relief Services in Peru, the U.S. church’s overseas aid agency and counterpart of Caritas Internationalis, a confederation of Catholic relief agencies.
Eighty percent of the fishing boats in the nearby town of San Andres were put out of commission, he said.
In Pisco’s main town square, in front of the free-standing towers that once fronted the now-razed San Clemente Catholic Church, a handful of tents now constitute the business district. In one, government officials process applications to replace identity cards. ID photos are taken in another tent, while in a third, the brightly colored logo of Movistar/Telefonica promises that cell phone service – if nothing else – goes on as it did before Aug. 15.

Across the square, a vendor sells baseball caps and sunglasses, primarily to the volunteer aid workers and employees of the relief agencies that have set up around town. A banner strung between two trees sometime after the earthquake reads: “Pisco: Solo hay uno,” or “Pisco: There’s only one.”

Vincentian Father Jose Emilio Torres Mota still sports a cast on one arm from his injuries during the earthquake. He had just concluded Mass in San Clemente for the feast of the Assumption when the ground began to shake.

“I was leaving the sanctuary when the roof fell on me,” he said in a tone that betrayed a weariness with weeks of retelling the story. “I flattened myself against the wall to save myself.” In the congregation of about 300, 147 people were killed as the historic church collapsed. Similar scenes played out in crowded churches in neighboring communities, though San Clemente’s death toll was the highest in one place.

The parish functions now out of a cluster of tents and plywood shelters. Behind the church’s towers, which had been rebuilt in the 1970s after another earthquake, all that remains of the sanctuary is a concrete slab with an elevated area where the altar was set. On weekends a large tent is raised for Masses, Father Torres said, but the Pacific breezes are too strong to leave it up. Weekday liturgies are held around the corner under a bright blue tarp covering a few dozen salvaged wooden pews.
Asked how he and his parishioners are holding up emotionally, Father Torres said psychologists have been made available to help people who are struggling. “But only about 50 have come.”

“Really, the most difficult to deal with are the people who don’t have a home,” he said. “A lot of people are still waiting to get places to live.”

Thousands of families are living in tents, many the kind of Coleman product used for recreational camping. Some are clustered in stadiums and other open areas. Other families pitch their tents alongside the rubble of their homes, to keep an eye on their belongings.

Through a network of parish volunteers, Caritas oversees 30 of the 350 “comedores,” or common soup pots, in Pisco that provide a hot midday meal using supplies from relief organizations. Other aid agencies and the government manage the rest of the comedores, said Caritas employee Angel Allccarima Ochante.

Allccarima said it’s difficult to guess how many people have left the battered region. About a month after the quake, however, many people who had gone to stay elsewhere with family had begun to return, he said.

Allccarima explained that with an often-vague system of proving property ownership, people worry that if they’re not physically occupying their land, it might be taken from them. As families return, however, they find little awaiting them.

“There is nothing open,” Allccarima said. “There are no paying jobs yet.”

Except for a few classes for high school seniors scheduled to graduate in December, schools remained closed. Electricity had been restored to about half the town, while water and sewer service still were not functioning.

Father Torres said progress in removing debris and replacing fallen structures had been inconsistent, with bulldozers there one week, but not the next.

Meanwhile, Peru’s housing and construction minister promised Oct. 2 that by Nov. 15 all the rubble would be gone from Pisco. Hernan Garrido-Lecca said once the land is cleared, houses would be rebuilt at the rate of 240 a week.

Allccarima said Caritas expects to be providing supplies for everyday living in the region at least through December.