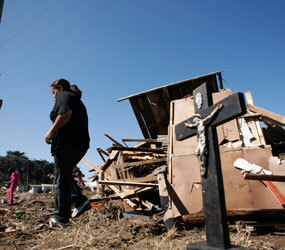 LIMA, Peru – Cleanup is beginning in towns on Chile’s central coast as electricity and telephone service is slowly restored and people try to rebuild their lives after a magnitude 8.8 earthquake killed nearly 800 people and caused millions of dollars in damage.

“We’re trying to get back to normal,” Maryknoll Brother John Nitsch told Catholic News Service in a March 3 telephone interview.

Brother Nitsch, who works in Curico, about 125 miles south of Santiago, the Chilean capital, was in the seaside village of Iloca with more than a dozen parish catechists when the earthquake struck at 3:34 a.m. Feb. 27.

The group fled to high ground and watched as a giant wave swept through the town about half an hour after the earthquake.

“Homes were moved from where they were into the street,” said Brother Nitsch, a Baltimore native. Cars were swept away, and the electricity went out. The only light came from the nearly full moon.

Because telephone service was disrupted, two days passed before Brother Nitsch could let his Maryknoll superiors know he was safe. When he and the catechists were able to return to Curico, they found many of the old adobe buildings in the city center in ruins.

“The rural cities and towns are mainly adobe buildings, and they fell down,” Nitsch said. “A lot of big, old churches came down.”

In the Talca Diocese, where he works, 14 churches were destroyed and 18 were seriously damaged.

Ironically, Brother Nitsch said, the poor neighborhood where he lives suffered little damage. His neighbors’ government-subsidized concrete-block homes withstood the quake. Many people in the region did lose their homes, however, and church workers in the Talca Diocese have made housing for earthquake victims an urgent priority.

“Winter is just around the corner, and winter here is very cold and damp,” he said.

Government officials have offered two-room prefabricated wooden dwellings as temporary housing, “so people can at least get through the winter months,” he said. “The problem is that in South America, temporary housing becomes permanent housing very quickly.”

In Linares, about 50 miles south, Father Waldo Alfaro, director of the diocesan office of Caritas Chile, also worries about housing for some 1,000 rural families whose adobe houses collapsed. Instead of temporary housing, he wants to help people rebuild solid dwellings as quickly as possible.

Linares, 186 miles south of Santiago, is in the Maule region, where most of the earthquake deaths occurred. The diocese has stopped accepting clothing, but still needs food and bedding for poor rural families in the dry coastal area known as the “secano.” Parishes are taking up collections and assistance is arriving from Caritas Chile in Santiago, he said.

“The secano is the poorest area of the region. The people are farmers who can grow only enough to feed their families,” he said. Many water storage tanks on which farmers depend cracked in the quake and must be repaired or replaced, he said.

The region south of Santiago is the center of Chile’s export agriculture, timber and wine-making industries, which were affected by the quake.

“This is harvest time for apples, pears and peaches,” Brother Nitsch said. Large agribusinesses “have to work, or they’ll lose everything.”

Around Curico, people are returning to work in packing plants that had withstood the earthquake and had their own generators, Brother Nitsch said. However, some business owners could not pay their workers because banks were not open and there was no electricity to operate automatic teller machines.

Many industrial farms and packing plants around Linares were idle, Father Alfaro said, because companies could not ship their products to market.

“It’s cheaper for them to leave the produce in the field,” he said, but it leaves day laborers without work.

Wine industry representatives reported about $250 million in losses, mainly from broken bottles of wine. But around Linares, where many rural families have small wine-making businesses, buildings collapsed, Father Alfaro said.

Meanwhile, aftershocks continued to rattle central Chile. Since the earthquake, the region has been hit by more than 130 shocks registering 5.0 or more, and 11 that were stronger than 6.0. A false tsunami alarm on March 3 sent coastal residents fleeing for the hills again.

Most of the earthquake deaths were caused by tidal waves along the coast between 4 a.m. and 6 a.m. Feb. 27. Amid criticism of the government’s tsunami warning system, Chilean Navy officials admitted that they lifted the warning too soon.

Brother Nitsch said he expects the death toll to rise.

“It’s going to be a lot time before we know exactly how many were killed,” he said. “A lot of people are missing. Even cars were swept out to sea.”