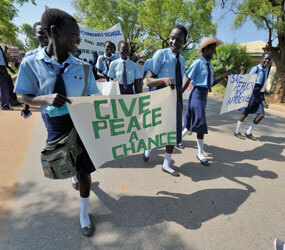 YAMBIO, Southern Sudan – When church bells ring in the villages nestled throughout the forest along the Congolese-Southern Sudan border, they are usually calling people to Mass. Yet these days, the bells can also ring out danger, alerting villagers to the threat posed by a Ugandan rebel group that has moved into the region, sowing terror in its path.

In response to a series of attacks by the Lord’s Resistance Army on both sides of the border, a homegrown network of village militias has formed to protect civilians. Known as the Arrow Boys, the squads of adult men are armed with bows and arrows, spears, clubs and an odd rusty rifle or two.

Their creation reflects frustration with the inability of governments to rein in an armed force that many believe is a proxy for northern government officials in Khartoum intent on sabotaging a January referendum on the South’s independence.

“They (LRA members) are black like us, but the difference is they have guns and uniforms, and they’ve come to kill us,” said Simon Peter Gamana, a 42-year old Catholic who heads the Arrow Boys in the small village of Riimenze, where there’s a church in the middle of the jungle built decades ago by Comboni priests. When the Arrow Boys ring the church bell, as they have on several occasions, villagers send their children to hide in the bush, and the men pick up their bows and arrows to fight.

Although seemingly out-gunned by the LRA, the Arrow Boys do not feel at a disadvantage given their intimate knowledge of the surrounding jungle, where they regularly hunt wild game. In a September encounter outside Riimenze, Gamana said the militia killed five LRA soldiers without suffering any loses.

“When they came into Sudan, at first they took our food,” Gamana told Catholic News Service. “Then they started taking people as well, young children that they turn into soldiers. So we organized to defend our community. We have no power. No one is looking after us. People are afraid to go out to harvest cassava on our farms, and we began to go hungry. So we took up the weapons we have and began to follow them.”

A Catholic nun from New Zealand who lives in Riimenze praised the men’s response.

“They’re a powerful force for good, and they’re doing it for love of their people, not for money,” said Sister Margaret Scott, a member of the Sisters of Our Lady of the Missions who came to Africa as part of Solidarity with Southern Sudan, a network of religious workers from around the world providing training for teachers, health workers and pastoral agents in the nascent country.

“They go out with very little, just their bows and arrows. If they have a few guns, they often don’t have many bullets. They try to push the LRA back into the Congo. That doesn’t help the Congolese, but it certainly helps the Sudanese,” Sister Margaret said.

Many people in Southern Sudan already had bad memories of the LRA, which was formed by northern Ugandans almost 25 years ago in response to tensions with the Kampala government. The Sudanese government in Khartoum often employed the LRA as a proxy militia to attack southerners. It was tit for tat, given that Kampala backed the southerners’ liberation movement.

Led by Joseph Kony, a former Catholic altar boy turned spirit medium turned military commander, the LRA quickly developed a reputation for brutality against its own people, kidnapping boys and turning them into soldiers, abducting girls and making them sex slaves. When the LRA tired of someone they had kidnapped, commanders mutilated them or ordered other children to kill them with sharp knives and clubs.

Kony was indicted by the International Criminal Court in 2005 and charged with crimes against humanity. He remains at large.

A combination of peace talks and robust attacks from the Ugandan military finally chased the LRA into a remote corner of Congo. In 2008, a three-nation military assault – supported by the United States – failed to eliminate the LRA, and instead seemed to enrage Kony, who had walked away from peace talks a few months earlier. LRA attacks on Congolese villages in December 2008 killed more than 800 people and drove thousands of civilians across the border into Southern Sudan.

“Most of the chapels along the border are closed. We reached the point where to assemble the people for prayer in the areas where the LRA was operating was putting the people in danger, because some people were killed in churches,” said Comboni Sister Giovanna Calabria, an Italian working in Nzara.

Sister Giovanna told CNS that most people in the area believe the LRA’s recent attacks are being encouraged by the rebel group’s old patron, the government in Khartoum.

“People who escaped have told us that when LRA leaders are sick, they are taken to Khartoum to be treated in a hospital. They have good guns and uniforms, and the people who got away said food was being dropped from planes. How can such a large group of people, both the soldiers and the people they have abducted, survive in the forest for so long without outside support? They couldn’t, unless there is someone behind them,” said Sister Giovanna, who worked for 13 years in northern Uganda before coming to Southern Sudan eight years ago.

LRA attacks in the region tapered off in September, yet the bishop of the Tombura-Yambio Diocese doubts the LRA threat has ended.

“Kony and his men are still here in the forest,” Bishop Eduardo Hiiboro Kussala told CNS. “Nobody has taken them out. He’s still equipped with guns and in contact with people outside who support him. So it hasn’t ended.

“The end will be when he’s out, when the abducted are set free, when the forest becomes free of these kind of people, and when he’s taken back to his country. Until then, we move with fear,” he said.

Bishop Hiiboro worries the LRA will renew massive attacks aimed at sabotaging the Jan. 9 referendum on independence, which requires that at least 60 percent of registered voters actually cast a ballot.

“The LRA is a time bomb for the referendum. Kony is preparing something for the 6th, 7th or 8th of January, when he’ll come in and start shooting. If that happens, who is going to vote? Nobody is going to vote, because people will be running.

“A huge number of people will be disappointed, and that disappointment can lead to violence,” Bishop Hiiboro said.