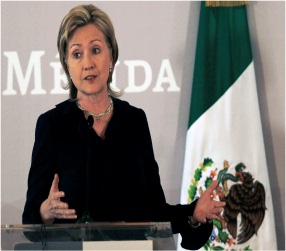 MEXICO CITY – A spokesman for the Diocese of Ciudad Juarez welcomed plans by the Mexican and U.S. governments to focus more on social and economic problems in Mexico, instead of just military and law enforcement crackdowns on the rampant violence attributed to narcotics-trafficking cartels.

The change of course, announced during a March 23 visit to Mexico City by Secretary of State Hillary Clinton, would put increased focus on creating jobs and reducing poverty in areas rife with violence.

The new approach comes as violence escalates in the crackdown on drug cartels, which has claimed more than 18,000 lives since December 2006 and left parts of Mexico – such as Ciudad Juarez – almost ungovernable.

It also comes as support for the crackdown on the cartels declines and allegations of wrongdoing and fatal mishaps committed by members of the Mexican military increase. A poll published March 22 in the newspaper Milenio found 59 percent of respondents believing the cartels were winning the war on drugs.

Clinton, who led a high-level delegation to Mexico City, called the situation “a shared problem” and acknowledged long-held Mexican complaints that rampant U.S. demand for illicit drugs and the illegal importation of firearms into Mexico fuels violence south of the border.

“Yes, we accept our share of the responsibility,” Clinton said. “The United States must and is doing its part.”

Clinton announced an expansion of a security agreement known as the Merida Initiative to include “institution building … and working together to spur social and economic development.”

The Mexican economy contracted by 6.8 percent in 2009 and the remittances sent home by migrants abroad also diminished, factors Clinton said the drug cartels have exploited.

“The recent downturn in economic growth and remittances has aided the drug traffickers in their recruitment of young people,” Clinton said.

Previous budget allotments provided by the Merida Initiative allowed for the purchasing of military equipment such as helicopters and the bolstering of intelligence-gathering capabilities. The New York Times reported this year’s $331 million budget allotment would instead focus on civilian police training, which would allow the more than 40,000 soldiers fighting the cartels to return to their barracks.

Military co-operation between the two countries is still expected to continue and possibly be expanded; Defense Secretary Robert Gates was among the participants in the U.S. delegation visiting Mexico.

Father Trevizo supported the dual approach of improving police forces and focusing on social and economic problems, explaining, “We need both strategies.”

The new approach, he added, “doesn’t end the need for a vigilant police force.”

Violence attributed to the cartels and the gangs working for them has been rife in Ciudad Juarez. The violence this year has included the massacre of at least 16 young people at a birthday party and the March 14 murders of three people affiliated with the U.S. Consulate in Ciudad Juarez.

Father Trevizo said violence has affected church activities in Ciudad Juarez. For example, he said, many parishes only celebrate Mass during the daylight hours because many of the faithful are fearful of heading out after dark.