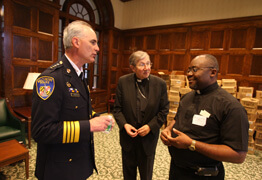 St. Frances Academy, Baltimore, rallies to fight being used as a drop point for the drug trade.

The victim in a carjacking trial is a priest from the Shrine of the Little Flower in Baltimore.

Amid those and other news items detailing Catholic institutions in Baltimore being confronted by the crime and social ills that afflict the city, the leadership in the archdiocese is doing something about it.

An urban vicariate meeting May 20 at St. Mary’s Seminary and University in Roland Park was the latest step in a plan designed to coordinate efforts among Archbishop Edwin F. O’Brien; Bishop Denis J. Madden, urban vicar; city pastors and priests; and law enforcement and health officials.

“We’re all committed to action that will promote nonviolence and peace,” said Bishop Madden. “We’ve got a working group for nonviolence in the city, about a dozen priests and pastors, who will meet again in the fall to see where we are on the commitments we’ve made.”

Mr. Sharfstein discussed Operation Safe Streets, which targets at-risk youth. According to the city health department Web site, the program, initiated in April 2007, is modeled after Chicago Ceasefire, which has been credited with reducing shootings and homicides through a comprehensive approach that includes clergy involvement.

“Everyone was all very honest and direct,” Monsignor William F. Burke, pastor of St. Francis of Assisi, Baltimore, said of the meeting. “It was interesting to hear the health commissioner (Mr. Sharfstein) outline Operation Safe Streets. We all know about the dangers of people, from early age to adulthood, being on the street when gunfire is involved.”

Information flowed both up and down, as city parishes shared strategies that they have already implemented.

“Some of the follow-up measures that have been proposed have already been in the pipeline at St. Veronica,” said Father Augustine E. Inwang, M.S.P., pastor. “We’ve been working in partnership with the police in Baltimore, and it’s always a good thing to see this reaffirmation, that everyone is on the same page.”

Cathy McClain, the youth minister at St. Veronica, was among the attendees.

“We hold a Job Readiness Workshop on the fourth Wednesday of every month,” Ms. McClain said. “We understand the importance of outreach, because it affects what’s going on inside the doors of the church.”

The meeting came amidst a carjacking trial in which Father James Miles, in residence at the Shrine of the Little Flower, was the victim in southwest Baltimore.

“It’s an uphill battle, but the church is making inroads,” said Father Michael J. Orchik, pastor of Shrine of the Little Flower. “For instance, the Community Mediation Program has used our rectory to bring people together and resolve conflict.”