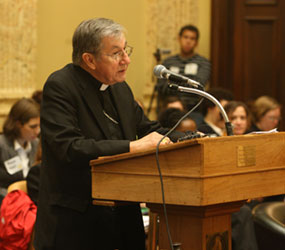 Speaking on behalf of Archbishop Edwin F. O’Brien, Bishop Denis J. Madden urged the Baltimore City Council to defeat a bill that would fine pregnancy resource centers $500 a day if they fail to post signs saying they don’t offer abortion or contraceptives.

“The proposal serves no useful purpose,” said Bishop Madden, testifying at an Oct. 27 hearing at City Hall that attracted more than 50 people to testify for and against the bill. “It harasses pregnancy resource centers.”

Bishop Madden, whose St. John Neumann vicariate includes Baltimore City, said City Council Bill 09-0406 “singles out” pro-life pregnancy centers, but does not require abortion clinics to post a list of services they do not provide.

City Council President Stephanie Rawlings-Blake, who sponsored the measure with 10 other council members, said her bill was “not an abortion bill.”

“It’s about truth in advertising,” she insisted. “If you comply with the law, there is no penalty.”

Rawlings-Blake said she believes crisis pregnancy centers do “good and charitable work,” adding that she believes “women have choices.”

The council president said she will support amendments to lower the proposed $500 fine and to change the penalties from criminal to civil ones.

Several times during the three-hour hearing, council members asked representatives on both sides whether they would support amendments that would require abortion providers to also post signs listing what services they do or do not provide.

“Is it wise to require anyone to post anything?” Schwartz asked.

Schwartz said enforcement of the proposed law would be subject to abuse. Someone could allege that he or she didn’t see the sign, he said.

Representatives of NARAL Pro-choice Maryland and Planned Parenthood both testified in favor of the measure.

Carol Clews, executive director of the Center for Pregnancy Concerns, said pro-life pregnancy centers already clearly indicate they do not provide abortion or contraceptives. The bill is unnecessary, she said.

Councilman Robert Curran acknowledged that when he recently visited one of Clews’ pregnancy resource centers in Baltimore, the first thing he saw was a sign near the reception desk that outlined what services are provided.

Anthony Dilulio, executive director of the Gabriel Network that provides support to women in crisis pregnancies, was among several bill opponents who questioned its rationale.

“Absent any documented evidence of harm, where is the proof women are going into these centers confused about what they offer?” he asked.

In written testimony, Archbishop O’Brien said pregnancy resource centers partner with and accept referrals from city and state agencies “because they provide services and materials that few others in the city provide.”

“The centers work with communities and congregations of all denominations throughout the city,” he said, “serving hundreds of women who have nowhere else to turn.”

The City Council is expected to vote on the measure Nov. 2.

Visit www.mdcathcon.org for more information or to contact the City Council.